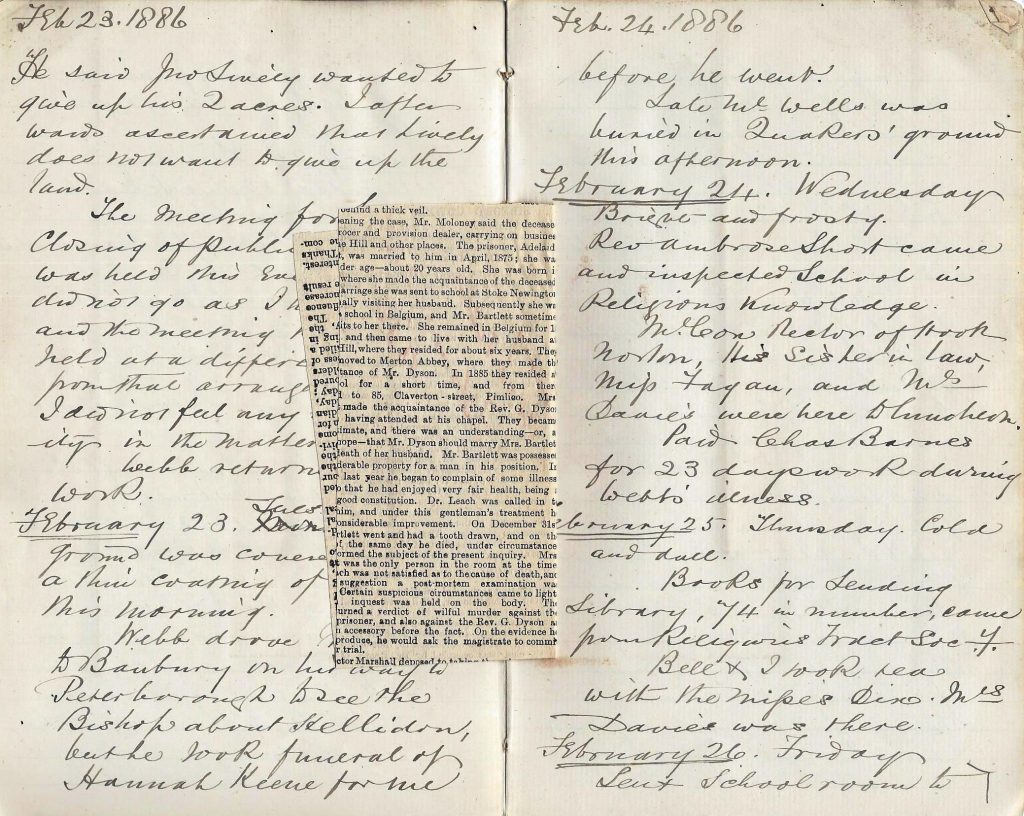 Bell and I took tea with the Misses Dix. Mrs Davies was there.

LONGIVITY.—Within the last week four old inhabitants of Sibford have died, whose united ages amounted to 322 years, giving an average of 80½ years. Their respective ages were 70, 82, 84, and 86.

SCIENTISTS AND ARTISTS, NOTE !—An entertainment by Mr. W. Dayner, of Rugby, is announced to take place at the Endowed School, Sibford Gower, tomorrow (Friday) evening. Among the promised attractions is “a very fine series of groups and views, photographed from life, illustrating the life of Mary Queen of Scots.” We intend to go to see these pre-photo-art photographs.

ENTERTAINMENT.—A very successful entertainment was given in the Friends Mission Room, Sibford Gower, on Friday, Mr. R. B. Oddie in the chair. Among the songs were the following:—”The vicar of Bray,” by Mr Ells ; “Love at home,” by Miss Fox ; “Home they brought her warrior dead,” Miss L. Mann ; “Rather,” Mr. Butler (encored) ; “While topers must be drinking,” Band of Hope Choir ; “Mill May,” girls of Sibford school ; and a duet “Where shall we wander, sister mine,” Mr. And Miss Somerton. In addition there were recitations by Misses H. Lamb and Enock, and Messrs. J. and W. Lamb ; readings of a humorous character by Messrs. Oddie, Aldridge, and Gower, and a dialogue, “A hole in the carpet,” by Miss Enock and Messrs. Lamb and Knight. The proceeds will be devoted to the harmonium fund of the Sibford Temperance Society. The success of the evening was largely due to the efforts of Mr Pettipher, by whom most of the arrangements had been made.

On Monday evening a crowded meeting was held in the Mission Hall, Sibford Gower, called by the Central Association for stopping the sale of intoxicated liquors on Sunday, and advocate the necessity of closing public-houses on the Lord’s day. In the absence of the Rev. E. Stevens (vicar), who was announced to, but could not preside, the chair was occupied by Dr. Routh, of Sibford Ferris.

The CHAIRMAN, in opening the proceedings, set forth in a vigorous address many of the reasons why the houses should be closed, in the interests of the publicans and their families, and servants, in fairness to other traders, and the protection of the people.

Mr. J. PETTIPHER moved, and Mr. LAMB seconded the first resolution—”That this meeting demands of England the same prohibition of the sale of intoxicating liquors on Sunday, which in other parts of this country, and our colonies have been attended with the most beneficial results, and that a petition to parliament to this effect be adopted and signed by the Chairman.”

Mr. C. DUFFELL FAULKNER (county coroner) Deddington, (one of the deputations from the Central Association), supported the resolution in a practical speech, and it was carried with four dissentients.

Mr. R. B. ODDIE moved, and Mr. KNIGHT seconded the second resolution—”That a memorial in favour of Sunday closing be adopted, signed by the Chairman, and forwarded to the Prime Minister, the Home Secretary and the M.P. for the Banbury Division of Oxfordshire.” This was supported at some length by Mr. H. J. Osborn (of Bristol), deputation for the association. He quoted the remarks of a Red Indian on first seeing the public-houses open on the Sunday, and the people punished for drunkenness the next day ; asserted the general opinion of England favoured Sunday Closing, as shown by canvasses of householders and other methods ; gave particulars of the success of the act in Ireland, Wales, Canada, &c., and detailed a personal visit and observation of Saturday drinking in Scotland contrasted with the next day Sunday, the result being altogether favourable to the Act. The speaker appealed to all electors to use their influence upon there M.P.s, doing what they could to increase the happiness of the homes of England, a sure result of getting a Sunday Closing law.

The speakers were listened to with much interest. The second resolution was passed unanimously. Thanks were voted to the Chairman, speakers, and the committee of the Hall.