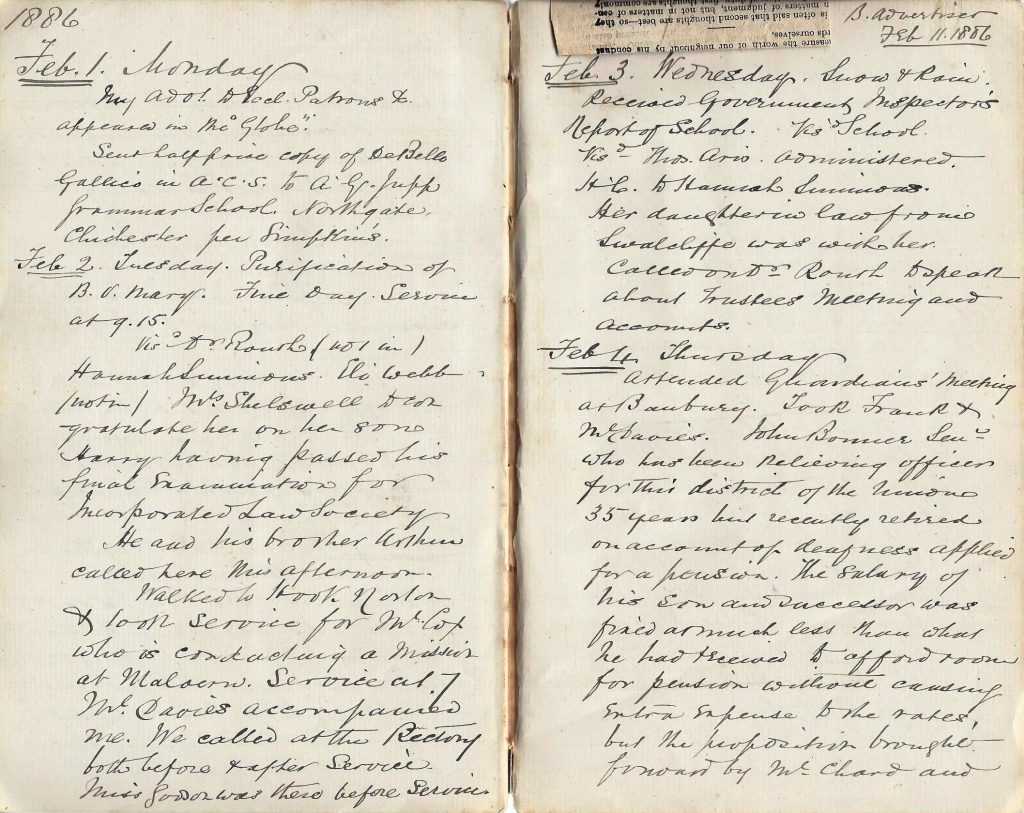 Attended Guardians Meeting at Banbury. Took Frank and Mr Davies. John Bonner senior who has been Relieving Officer for this district of the Union 35 years but recently retired on account of deafness applied for a pension. The salary of his son and successor was fixed at much less than what he had received to afford room for pension without causing extra expense to the rates, but the proposition brought forward by Mr Chard and seconded by myself, though supported by the chairman and many other of the better class of members was lost.

Dr Routh came up this evening at my request to audit the accounts of the Town Estate for the past year.

Cutting from Banbury Advertiser of 11 February 1886:

It was reported that there were now 176 inmates of the House against 179 last year. During the first week 52 vagrants had been relieved at a cost of 12s. 9d., against 29 in the corresponding period last year ; and in the second week 55, costing 13s. 9d, against 32.

A letter was read from Messrs. Gillet and Co., referring to some remarks which had been made at recent Board meetings respecting the balance in the hands of the Treasurer, and calling the attention of Board to the fact that the bank account was now £180 overdrawn.

On the 24th December last the Clerk read a letter from Mr. John Bonner, senior , asking for a superannuation allowance, and Mr. Chard gave notice that at this meeting of the Board he would move that an allowance of £20 per annum be granted to Mr. Bonner for life.

In reply to a question from the Chairman it was stated that Mr. Bonner’s age was 63.

Mr. Chard formally moved that the allowance should be granted. He said that some three or four months ago when Mr. Bonner applied for his allowance he had an interview with some of the Guardians of the district in which Mr. Bonner had been officially engaged and they thought it would be a good thing if they could reduce the salary of the new officer by £20 a year and give that sum as Mr Bonner’s allowance. That matter was brought before the Board and was carried with only one dissentient. They knew very well that Mr. Bonner had been an officer for 33 years, and during the whole of that time he had carried out his duties in a proper and honest way, and not only that, but during the whole time there had never been a single complaint against him. Twenty pounds a year was not much, and if Mr. Bonner came there as a pauper they would probably give him that much a year. [Mr. Hall: give him the House, he’s been earning good wages]. (Laughter.) Mr. Chard (continuing), said they had now a lot of young officers doing duty, and it would be some little inducement to them to carry out their duties satisfactory if they had something to look forward to.

The Rev. A. Stevens said he had known Mr. Bonner ever since he had been a guardian and some years before that, and he knew that he had always discharged his duties conscientiously and with a great deal of kindness and consideration for the poor, and when he had unpleasant duties to perform he had performed that in the best possible manner. After serving the Guardians for thirty-three years he had retired because he conscientiously felt that he was unable to efficiently discharge the duties of his office owing to deafness. The salary of his successor had been reduced because it was thought that the sum might be given as an annuity to Mr. Bonner without intrenching further upon the rates. He had pleasure in seconding the motion.

Mr. Hall moved as an amendment that the annuity should not be granted.

Mr. Page : I will second that. I don’t see the least occasion for it. Mr. Bonner has carried out his duties satisfactorily, but at the same time he has been well paid for his work. He has had an ample salary to provide for himself with, and it is not right in any sense of the word to call upon the guardians at these depressed times to grant him an annuity. If there is a class of persons who at the present time are poor and have a difficulty in finding money it is the ratepayers, and it would be an act amounting almost to practical dishonesty if we were to tax these people with a sum of £20 a year ; and I not only hope you will refuse to grant this annuity but will make it a rule as long as the Board is in existence.

Mr. F . Fox said the expenses must be reduced in some way, or they would never have the money to pay.

The Chairman felt bound to make an observation. He did not agree with those who dissented, although he knew they did so perfectly conscientiously. He fully endorsed what had been said as to the way Mr. Bonner had discharged his duties, and he called the attention of the board to the fact that Mr. Bonner once saved the Board £83, and on another occasion £72. There was an idea that he had gone to live in luxury at the Mason’s Arms, but he (the chairman) thought it was a sort of island of St. Helena—with very few calls in the course of the year—(laughter)—and Mr. Bonner had outwitted himself in going to live at such a place. He did not think a man could save much on £120 a year, and he thought Mr. Bonner had thoroughly earned the annuity during the thirty-three years he had served the Board. He urged the Guardians to support the proposition.

The Rev. E. Ayton said he quite agreed with Mr. Page generally, but he must say that on the ground of economy alone it would be to the interest of the ratepayers in the long run to grant this allowance. It was in the power of the relieving officers either to save or waste the property of the ratepayers, but Mr. Bonner had managed so well and had saved two large sums for the Board that he thought the allowance should be granted as an encouragement to young relieving officers.

Mr. F. Fox : How can any officer come into my district and squander money ? I defy relieving officers to squander money if the Guardians look after their respective districts.

Mr. Hall : Especially when we have such an expensive working machine as the poor law .

Mr Fox : We cannot really afford to pay it, for times get worse every day. I defy any man in the room to pay except clergymen and—(Laughter.)

The motion was then put, and fifteen voted for it, and twenty-three against, so that it was lost.

THE EXPENDITURE OF THE BOARD. — A SWEEPING PROPOSAL.

Mr. Hall : I think we should be doing our duty as Guardians by reducing the salaries all round. I beg to give notice though that I will move at a subsequent meeting that the salaries of all the officials be reduced 10 per cent. £70 a year now will go as far as £100 used to.

Rev. A. Short : Does the reduction apply to the Clerk as well?

Rev. E. Stevens : it is to include the Clerk. (Laughter.)

The Chairman : I am sorry to hear it. (Renewed laughter.)

THE COST OF OUT-RELIEF.

Mr White (sanitary inspector) reported that there were no fresh cases of small-pox in the district.