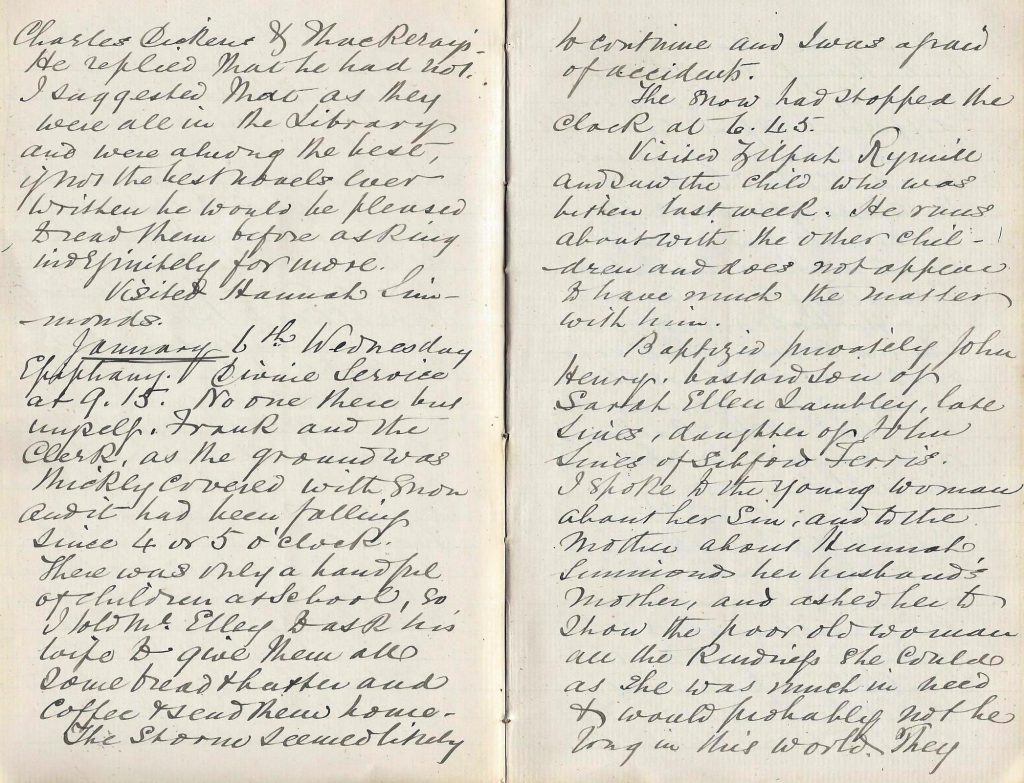 Epiphany. Divine Service at 9.15. No one there but myself, Frank and the Clerk, as the ground was thickly covered with snow and it had been falling since 4 or 5 o’clock. There was only a handful of children at School, so I told Mr Elley to ask his wife to give them all some bread and butter and coffee and send them home. The snow seemed likely to continue and I was afraid of accidents.

Visited Zilpah Rymill and saw the child who was bitten last week. He runs about with the other children and does not appear to have much the matter with him.

Baptized privately John Henry, bastard son of Sarah Ellen Lambley, late Lines, daughter of John Lines of Sibford Ferris. I spoke to the young woman about her Sin, and to the mother about Hannah Simmonds her husband’s mother, and asked her to show the poor old woman all the kindness she could as she was much in need and would probably not be long in this world. They received what I said very well, though the whole family bear a very indifferent reputation. Mrs Lines showed me some bread she had baked from the wheat grown on their allotment and said she would make a little loaf specially for me for me next time she baked and would like me to taste what nice bread it was : whereat I expressed my pleasure, etc.

The Sibford Brass Band Supper took place in the School room this evening. It was a hot one consisting of a joint of beef, a leg of mutton, Yorkshire pudding, vegetables, cheese and ale for those who wished it with ginger ale and lemonade for the total abstainers etc. Pipes and tobacco were also supplied. Everything went off admirably. The following is an account I wrote for the Local Papers.

SIBFORD BRASS BAND.—The first annual meeting of this young and vigorous society was held in the schoolroom on Wednesday, January 6th, commencing with an excellent supper provided at the cost of the Society. All members, twelve in number, were present with their bandmaster, together with some of the chief residents of the parish, among them were Dr. Routh, Mr. R.B. Oddie, Mr. J. Woolgrove, Mr. J. Rimmell, Mr. John Lamb and Mr. Elley. Mr. Norris, of London and Sibford Gower was also invited, but was unable to be present. The Vicar, the Rev. E. T. Stevens, who is president of the Society, took the chair, and on the removal of the cloth read the balance sheet for the past eighteen months ; the band having been formed in June 1884, although the instruments were not purchased till the following November. Up to the end of 1885 the members’ subscriptions amounted to £59 9s. 6d., and donations to £19 9s. 7d. The cost of the instruments was £50 17s. 6d., and after paying the bandmaster’s salary, rent, etc., there was a balance in hand of £12. 8s., which will form the nucleus of a uniform fund. The President said the best thanks of the society were due to the treasurer, Mr. Thomas Lamb, for his services during the past eighteen months, and he was unanimously re-appointed to the office he had filled so courteonsly and so well, one of the members declaring that if there was one of their number who would make a better treasurer “he should like to see him.” R. Gaydon was also thanked for his services as secretary, and J. West was appointed to the office for the year 1886. The president added that he had great pleasure in congratulating the society on the progress it has made, and on having secured so excellent a bandmaster as Mr. J. Griffin, under whose teaching they had learnt to do their work so well. He also congratulated them on the general good character the band bore in the parish, which was due to the ready and cheerful manner in which the members had kept the rules of the society. He said that a brass band might easily become a nuisance to a neighbourhood, but he felt sure that if the members of this society continued to adhere to the rules, which every member had signed, and the most important of which was that no member should be . guilty of any conduct whatever that would he likely to bring discredit upon the band, all the inhabitants of the parish and the neighbourhood would continue to look upon it as a pleasant and welcome addition to country life, and the boys of the parish would he always anxiously looking forward to the time when they might hope to become members of the society, and to have the privilege, of which some were already ambitious, of beating the big drum, or blowing one of their handsome and melodious instruments. They would thus always have recruits in view. Mr. R. B. Oddie followed with a pleasant and appropriate speech saying many kind things of the president, and was succeeded by the bandmaster, who not only complimented the members on their regularity of attendance at practice and their attentions to his instructions, but also gave them some good advice for their future guidance. Dr. Routh expressed his great gratification at meeting the members on such an occasion, and his astonishment at the great progress-they had made in little more than twelve months. They must have been very diligent and self denying, which were excellent things in themselves and would do them good in other ways. Several pieces were played during the evening, with much spirit, the members evidently enjoying their performance with their musical instruments almost as much as they had done that with their knives and forks. The remainder of the evening was spent in a pleasant chat over the affairs of the society, and before midnight the very enjoyable meeting was brought to a close.