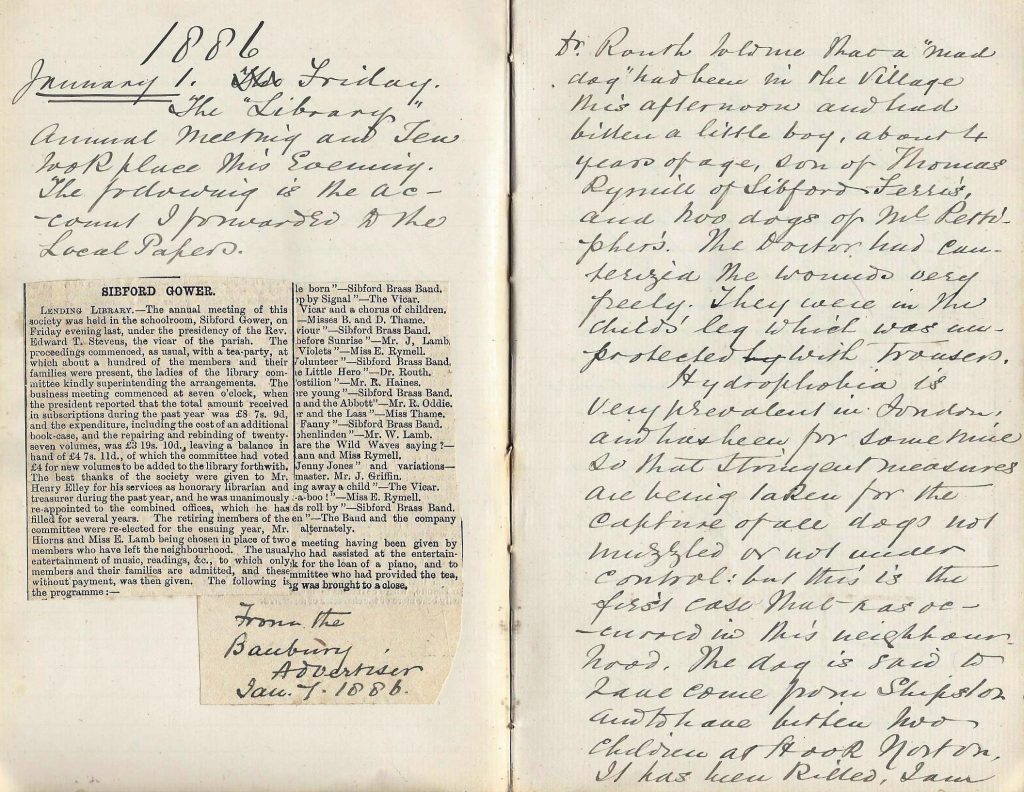 The “Library” Annual Meeting and Tea took place this evening. The following is the account I forwarded to the Local Papers.

LENDING LIBRARY.—The annual meeting of this society was held in the schoolroom, Sibford Gower, on Friday evening last, under the presidency of the Rev. Edward T. Stevens, the vicar of the parish. The proceedings commenced, as usual, with a tea-party, at which about a hundred of the members and their families were present, the ladies of the library committee kindly superintending the arrangements. The business meeting commenced at seven o’clock, when the president reported that the total amount received in subscriptions during the past year was £8 7s. 9d, and the expenditure, including the cost of an additional book-case, and the repairing and rebinding of twenty-seven volumes, was £3 19s. 10d., leaving a balance in hand of £4 7s. 11d., of which the committee had voted £4 for new volumes to be added to the library forthwith. The best thanks of the society were given to Mr Henry Elley for his services as honorary librarian and treasurer during the past year, and he was unanimously re-appointed to the combined offices, which he has filled for several years. The retiring members of the committee were re-elected for the ensuing year, Mr. Hiorns and Miss E. Lamb being chosen in place of two members who have left the neighborhood. The usual entertainment of music, readings, &c., to which only members and their families are admitted, and these without payment, was then given. The following is the programme :—

The thanks of the meeting having been given by acclamation to all who had assisted at the entertainment, to Mrs Enock for the loan of a piano, and to the ladies of the committee who had provided the tea, the pleasant meeting was brought to a close.

Dr Routh told me that a “mad dog” had been in the village this afternoon and had bitten a little boy, about four years of age, son of Thomas Rymill of Sibford Ferris, and two dogs of Mr Pettipher’s. The doctor had cauterized the wounds very freely. They were in the child’s leg which was unprotected with trousers.

Hydrophobia is very prevalent in London, and has been for some time so that stringent measures are being taken for the capture of all dogs not muzzled or not under control : but this is the first case that has occurred in this neighbourhood. The dog is said to have come from Shipston and to have bitten two children at Hook Norton. It has been killed, I am glad to hear.