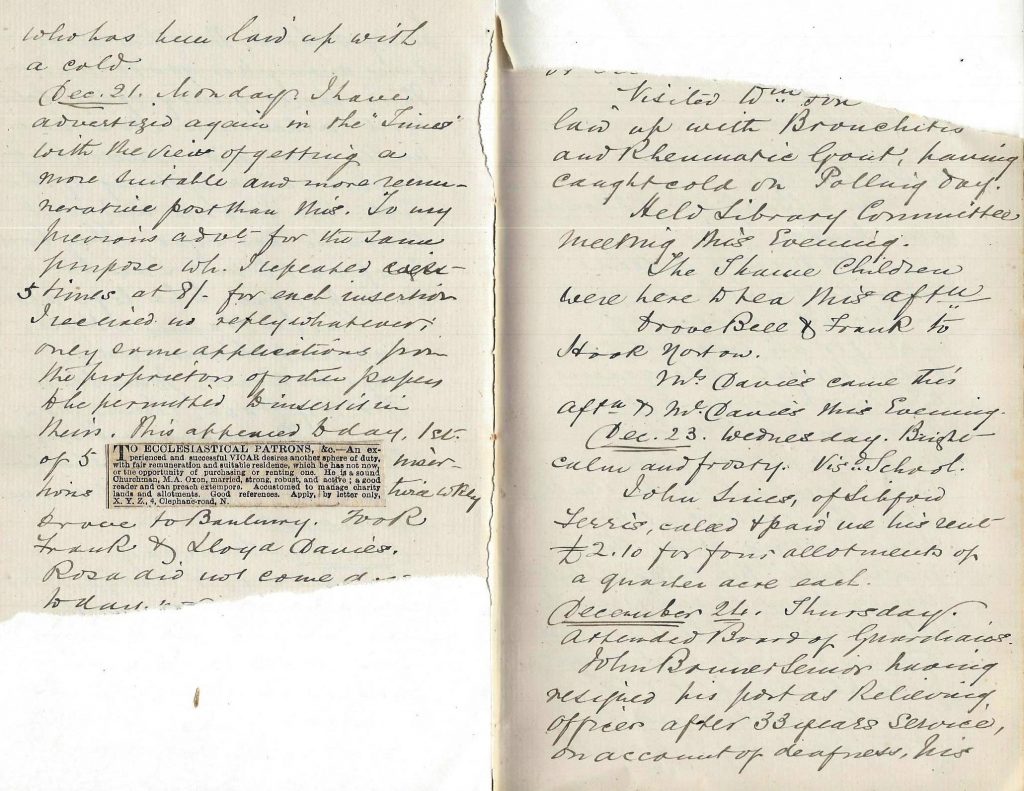 Attended Board of Guardians.

John Bonner Senior having resigned his post as Relieving Officer after 33 years service, on account of deafness, his…

The top of the next page has been torn off. Continuing after the tear…

…note to Dr Routh … John Reason asking him to supply the latter with a suitable truss.

Dr Routh called and asked for School room on Thursday evening next for an invitation ball – profits to be given to Churchwardens for Harmonium Fund. I gave my permission but said I would lay the matter before the Trustees at their next meeting – that they might take the responsibility, as some of our “friends” who might not be invited to these private parties might possibly suggest to the Assessment Committee of the Banbury Union the desirability of rating the School room to the relief of the poor. The Assessment Committee of St Leonard’s Shoreditch recently assessed one of the London School Board Schools at £1380 per annum. On appeal to Quarter Sessions it was reduced to £1150. The High Court of Justice fixed it at the latter sum. The Times says the dispute between the School Board and the Assessment Committee was with regard to the mode of valuation adopted which would make a difference of £20,000 per annum to the London School Board.

Dr Routh spoke about desirability of reducing School fees to a penny a week all round. Lewis Poulton has been agitating the matter – and the doctor has very crude notions on the subject. He said, among other things, that it was not right to charge one person more than another for the same thing. I reminded him that he himself and his profession did so, for they charged their patients not according to the services rendered but according to their position; whereupon he collapsed.