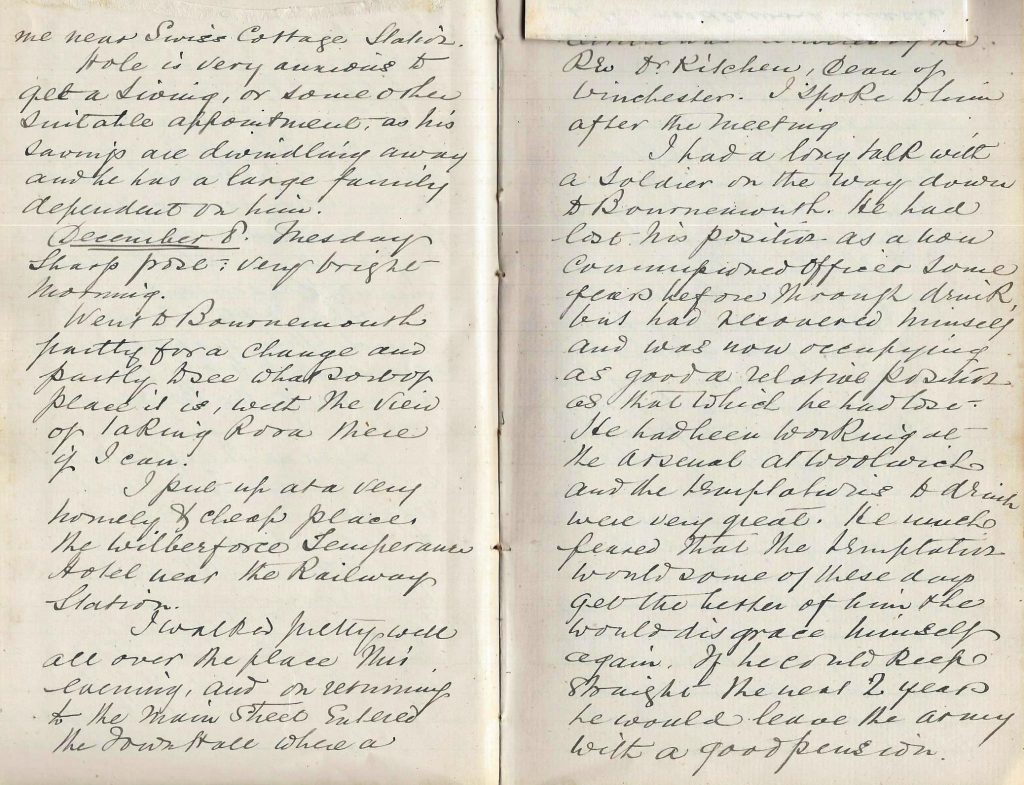 Went to Bournemouth partly for a change and partly to see what sort of place it is, with the view of taking Rosa there if I can.

I put up at a very homely and cheap place, the Wilberforce Temperance Hotel near the Railway Station.

I walked pretty well all over the place this evening, and on returning to the Main Street entered the Town Hall where a lecture was delivered by the Rev Dr Kitchen , Dean of Winchester. I spoke to him after the meeting.

I had a long talk with a soldier on the way down to Bournemouth. He had lost his position as a non-commissioned officer some years before through drink, but had recovered himself and was now occupying as good a relative position as that which he had lost.

He had been working at the arsenal at Woolwich and the temptations to drink were very great. He much feared that the temptation would some of these days get the better of him and he would disgrace himself again. If he could keep straight the next 2 years he would leave the army with a good pension. He called himself a Roman Catholic, but would not go to the Priest because he would call upon him to go to the foot of the altar and take a solemn vow not to touch intoxicant again. He did not often go to the R. C. Chapel, but sometimes went to the Methodists etc.

I recommended him to abstain from alcoholic drinks altogether, either with or without taking a “pledge” and to pray to God night and day to help him to keep his resolution. I had a long, interesting and touching conversation with him, and he said that the talk with me had done him more good than anything and that he would have no difficulty if he had such a gentleman to talk to now and then about his soul etc etc. When he left the railway carriage he asked me for my address and as I had no card with me, nor even an envelope I wrote it on a piece of newspaper and gave it to him. He said he should very much like to write to me. He was a man of pretty good education, and had been for a time acting Schoolmaster in some barracks or at some station in England the name of which I forget.

I was very much pleased with what I saw of Bournemouth though the ride from London was very tedious.

I am glad to hear that you arrived safely at your journey’s end.

Last night and the night before I slept with mamma in her bed and Sprite slept in the kichen.

I have a little cold and a very bad head-ache. Yesterday morning while I was reading my Latin before I wrote it out I went fast asleep but I am better now.

There is a very sharp frost this morning and the pond is frozen over but not enough for the boys to slide on. Mamma went up to the school yesterday afternoon to look at the needlework and she and I went up to Hannah Keens to take her a little pudding because it was her Birthday and she is 82.

Sissie went out in her carriage in the afternoon.

Poor old David Hone tumbled down in a fit and cut his head very badly. Last night they sent for a little wine and some sticking plaster and he is in bed.

The Birds, Horse, Dogs, and cats, all get on very nicely.

P.S. The letters I enclose came this morning. Please let me hear how you are if you have time.