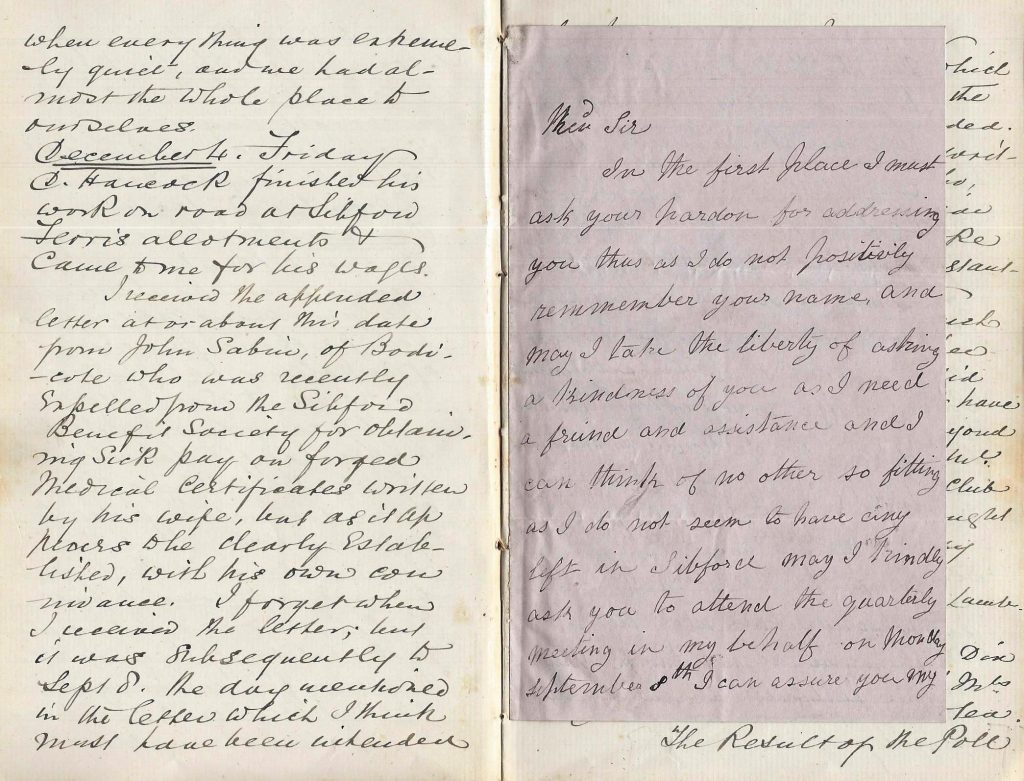 D. Hancock finished his work on road at Sibford Ferris allotments and came to me for his wages.

I received the appended letter at or about this date from John Sabin of Bodicote, who was recently expelled from the Sibford Benefit Society for obtaining sick pay on forged medical certificates written by his wife, but as it appears to be clearly established, with his own connivance. I forget when I received the letter; but it was subsequently to September 8, the day mentioned in the letter which I think must have been intended for January 4, as Monday Sept 7 was the day on which John Sabin appeared before the meeting here which I attended. This appears to have been written by the man’s wife, who, according to Mr Short, Vicar of Bodicote to whom I spoke about the matter, is constantly guilty of some petty dishonesty or other, such as forging accounts on her Clothing Club ticket etc. I did not reply to the letter nor have I yet taken action on it beyond mentioning the matter to Mr Short and to some of the Club members, all of whom thought that the man was equally guilty with his wife.

In the first place I must ask your pardon for addressing you thus as I do not positively remmember your name, and may I take the liberty of asking a kindness of you as I need a friend and assistance and I can think of no other so fitting as I do not seem to have any left in Sibford may I kindly ask you to attend the quarterly meeting in my behalf on Monday September 8th. I can assure you my Dear Sir that I cannot express to you in writing the sorrow and mentale suffering it has caused me and my family in the sad affair with the sibford benefit society which you will rember I can say with a clear conceince that as far as I am concerned I am perfectly innocent as to the whole affair untill it was made know to me and to add to my troubles I am expelled as a member of the above mentioned society for breaking the rules which I have never done I therefore do not think they are justified in doing so. I have been in the society 30 years or near upon it I am not quite sure of the exact time and I have received but very little benefit from it and I am now too old to enter another and I must say Sir that I take it unkind and very hard after making the recopence required which was that the money received was refunded at once which at any cost I borrowed and I will give you My Dear Sir a little idea what I have to contend with while paying it back there are 8 of us in family I am receiving 12s per week and loose wet time out of it and I pay 5s per week to the gentleman I that kindly lent it to me and never omit doing so but with the blessed Lords help I hope to get through it and if you will kindly do this for me as the members will most of them will be present and ask them to kindly consider the case and that I hope they will again take me on as a member as before.

The result of the poll for the North Oxfordshire Division was declared to day, viz:-

Mr Oddie, Headmaster of the Friends’ School at Sibford Ferris, and Mr Frederick Mann, of Blenheim Farm, Sibford Gower, were very active in the Liberal interest.