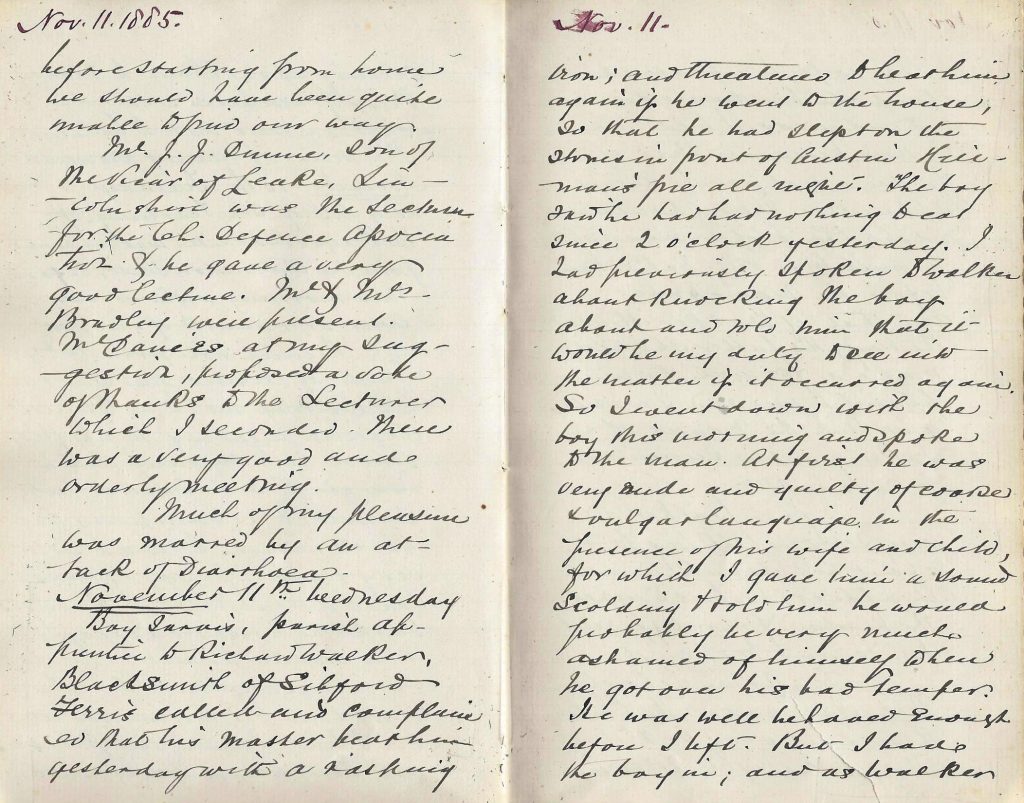 Boy Jarvis, parish apprentice to Richard Walker, Blacksmith of Sibford Ferris, called and complained that his master beat him yesterday with a rasping iron; and threatened to beat him again if he went to the house, so that he had slept on the stones in front of Austin Hillman’s fire all night. The boy said he had had nothing to eat since 2 o’clock yesterday. I had previously spoken to Walker about knocking the boy about and told him that it would be my duty to see into the matter if it occurred again. So I went down with the boy this morning and spoke to the man. At first he was very rude and guilty of coarse and vulgar language in the presence of his wife and child, for which I gave him a sound scolding and told him he would probably be very much ashamed of himself when he got over his bad temper. He was well behaved enough before I left. But I had the boy in; and as Walker and his wife complained about his disobedience and rudeness I told him in their presence that if he were not an obedient apprentice they should adopt the proper means to punish him viz:- take him before the magistrates: and that if Walker ill used the boy, the latter should make a formal complaint to me and I would give him the means of taking out a summons for assault.

I gave Walker a very serious talking to about his drunkenness; it appears he has signed the pledge four different times and broken it.

Taught in School this afternoon. The children sing very badly. They do not get either the right notes or the right time. I told the master that he had better set aside all those songs which they sang incorrectly and take up some fresh ones.

Received polite note from the Clarendon Press this morning saying that the delegates did not see their way to undertaking the publication of my “Teaching of the Prayer Book” etc, but not assigning any reason.

George Harris, wheelwright son-in-law of Ezekiel Hancox remved from Sibford to North Newington, his native place, as he cannot get work at his trade here sufficient to justify him in remaining.