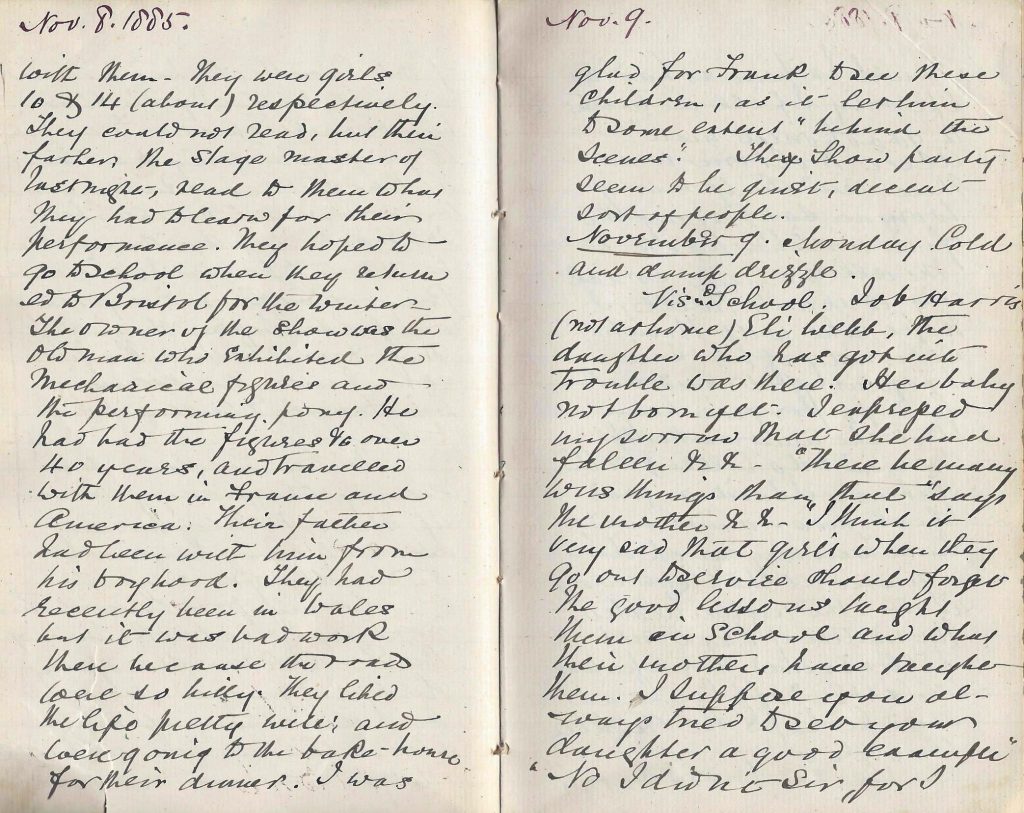 Visited School, Job Harris (not at home), Eli Webb – the daughter who has got into trouble was there. Her baby not born yet. I expressed my sorrow that she had fallen, etc, etc. “There be many wus things than that” says the mother, etc, etc. I think it very sad that girls when they go out to service should forget the good lessons taught them in school and what their mothers have taught them. “I suppose you always tried to set your daughter a good example”.

“No  I didn’t Sir, for I should ha been as bad as she only I fell in with a good honest man”.

Alice Holtom was there and the young woman sat facing the fire with her back to me all the time cracking walnuts. “Well, I hope she will think seriously of her sin and repent of it and ask God to forgive her. But she must make up her mind to do better for the future.” I said a good deal more – and should have been very much disgusted at the light way in which the mother treated the matter if I had not felt assured that she was a little “off her head” and perhaps the daughter was also.

Visited Widow Harry Hall, the tailor, William Barnes (not at home). Asked Joseph Harris to set Daniel Hancock to work on the road through the allotments at Sibford Ferris.

Mr Davies came down at noon and at night to assist Webb in carrying Rosa down and up stairs.

Met Mr Mann in the road near the school this evening about 10.10. He said they had heard from their daughters Elizabeth and Emma who were both well and happy in their respective situations; also from their son Julian who is on his way again to the Black Sea. He says he begins to get tired of his position but he (Mr M.) recommends him to stick to it and he will get promotion some day. for there is plenty of hard work and struggling on land as as on the sea.

I baptized three babies yesterday, all boys, and they seemed to be crying all the time. After the Baptism my voice was so queer I could not speak till I got a glass of water from the vestry.

I preached on Disestablishment and Disendowment, telling my hearers what would be the result of these two measures if carried, and saying what I thought of the Character of the proposal. I also read a letter issued by the Archbishops of Canterbury and York giving good general advice to the new electors and calling upon them to exert their franchise with discretion and not to believe the “Men of many promises”.