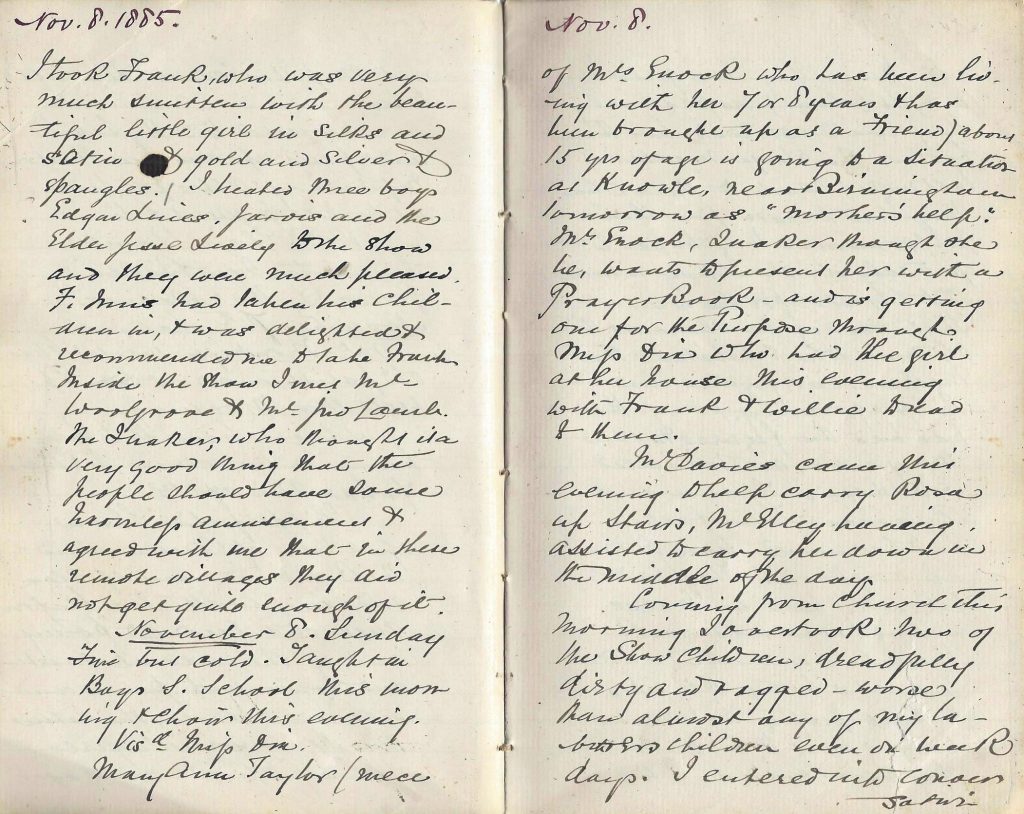 Fine but cold. Taught in Boys’ Sunday School this morning and choir this evening.

Mary Ann Taylor (niece of Mrs Enock who has been living with her 7 or 8 years and has been brought up as a Friend) about 15 years of age is going to a situation at Knowle, near Birmingham tomorrow as “mother’s help.” Mrs Enock, Quaker though she be, wants to present her with a Prayer Book – and is getting one for the Purpose through Miss Dix who had the girl at her house this evening with Frank and Willie to read to them.

Mr Davies came this evening to help carry Rosa up stairs, Mr Elley having assisted to carry her down in the middle of the day.

Coming from Church this morning, I overtook two of the Show children, dreadfully dirty and ragged, worse than almost any of my labourers’ children, even on weekdays. I entered into conversation with them. They were girls 10 and 14 (about) respectively. They could not read but their father, the Stage Master of last night, read to them what they had to learn for their performance. They hoped to go to school when they returned to Bristol for the winter. The owner of the Show was the old man who exhibited the mechanical figures and the performing pony. He had had the figures etc. for over 40 years and travelled with them in France and America. Their father had been with him from his boyhood. They had recently been in Wales but it was bad work there because the roads were so hilly. They liked the life pretty well; and they were going to the bake-house for their dinner. I was glad for Frank to see these children, as it let him to some extent, “behind the scenes”. The show party seem to be quiet, decent sort of people.