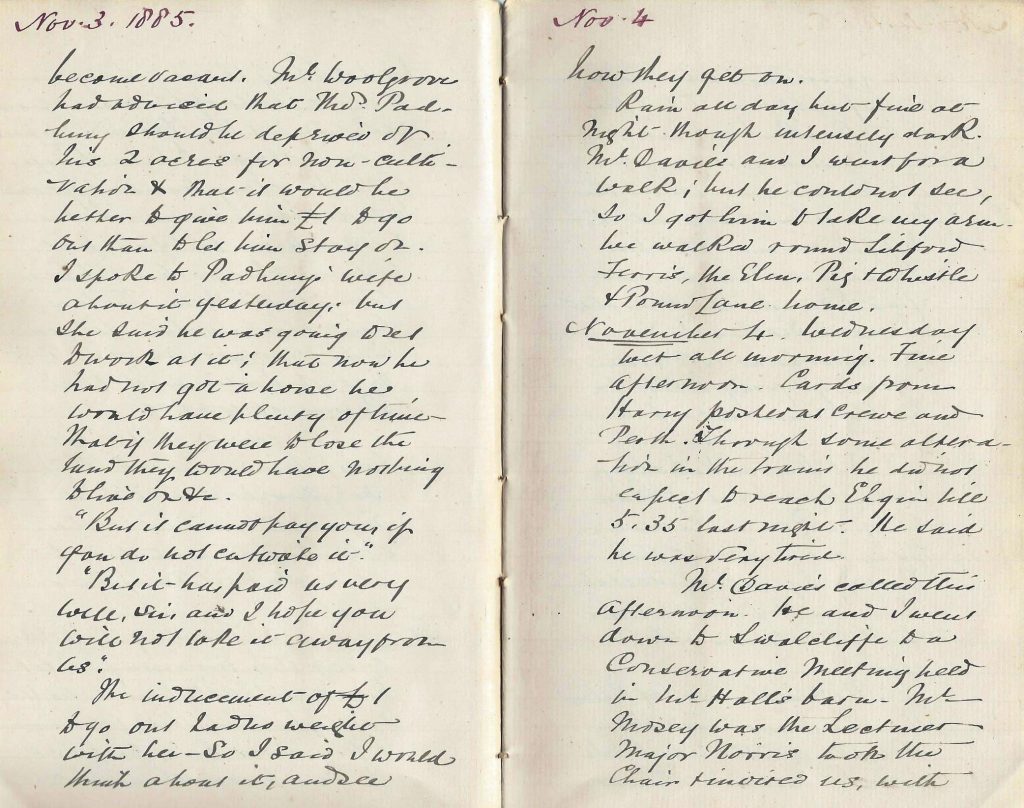 Wet all morning. Fine afternoon. Cards from Harry posted at Crewe and Perth. Through some alteration in the trains he did not expect to reach Elgin till 5.35 last night. He said he was very tired.

Mr Davies called this afternoon. He and I went down to Swalcliffe to a Conservative meeting held in Mr Hall’s barn. Mr Mosey was the Lecturer. Major Norris took the Chair and invited us, with other gentlemen who were on the platform to supper at the park. We went and were well entertained.

Mr Norris was not at the meeting, but came into the supper room – and when he saw me he said he was glad to see me, but thought I was in Scotland! Someone must have told him of Harry’s going there and he had mixed us up together.

Mr Herrick Dalby, Timber merchant of Banbury, a Roman Catholic spoke very well at the meeting against Disestablishment and Disendowment and the abolition of School fees.

The Dissolution of Parliament is announced for November 18 and the new writs will be issued the same night.

Cutting from the Banbury Guardian, 5 November 1885

The Chairman said they were there avowedly to disseminate conservative principles, and he hoped those who might not agree with them at first would agree with them before they went away that evening. At this moment the country was seething and boiling with an agitation , universal and deep seated, the inevitable convulsion attendant on the shifting and widening of the basis of power. It was the duty of everyone to make up his mind on which side he would range himself. The Conservatives had chosen for their motto the time honoured one of “God and the King,” and they wished to conserve and maintain true religion and a Christian education to every Christian child, and to administer wise laws under the Sovereign, whereby everybody should feel secure, promoting the interests of all classes, and not of one at the expense of another. He could not discover any distinct motto or principle on the Liberal side, save that of destroying all that was serviceable, and putting whatever Mr Chamberlain might propose. There were two candidates before them, Mr. Wynne and Sir B. Samuelson. Mr. Wynne recognised that state could not prosper unless every class in prospered at the same time, while Sir B. Samuelson seemed to offer as remedies measures which in the end would be likely to ruin them body and soul, and to make promises which would be found very hard to redeem. He then introduce Mr. Mosey, who he said would be better able to explain to them the reason for the political faith that was in them—(applause).

Mr. Mosey said they were told that the two millions of new electors were all going to vote one way; but they ought to consider whether the party that came before them with so many promises had fulfilled the promises they had made in the past. The Liberals had promised in 1880, “Peace, retrenchment, and reform.” Peace! Could a war expenditure of 30 millions of money and a loss of 60,000 lives be called peace? Did a budget standing at 100 millions and the income tax at 8d. in the pound show retrenchment an economy? The Liberal government had spent 40 millions of money more than the Conservatives in the same space of time. The only measure of importance to them that the Liberals have passed was the extension and redistribution of the franchise, and that they had to call in the assistance of the Conservatives to formulate. After calling attention to the way in which the late government had managed the affairs of South Africa, and the loss of life and treasure in Egypt, he went on to speak of the future program of the Liberal party. He said that 480 liberal candidates had taken up the cry of disestablishment and disendowment of the church, but now they were trying to withdraw from that scheme. There was no greater fallacy than to suppose they could ever have free education. If they paid for education out of the rates they would be taxing themselves for their whole lives, and perhaps for years after their children had grown up. The Liberal party now denied that they had ever promised three acres and a cow, and so they would remember that they would not get three acres and a cow from the Liberals. He went on to show that the Conservatives had been the first to give benefits to the working classes, and asked them to place no reliance on the bare promises of the Liberals, but to support the party who would foster the lawful aspirations of our colonies, do all they could to defend that grand old institution of the country, the Church of England, foster religious education, bring happiness and contentment by means of sound and wise legislation, and prevent the disintegration of our great Empire.

Mr. Dalby, in proposing a vote of thanks to Mr. Mosey, said that although he was not a member of the Church of England, yet he would not lift a finger to bring about disestablishment. He did not see any harm in canvassing supposing they did no more than respectfully asked a man for his vote and interest, but he would not do more unless it were at a public meeting, but let each man decide for himself, and act independently and conscientiously—(applause).

Mr. Barrows had great pleasure in seconding the vote of thanks to Mr. Mosey, and he asked them not to led away by the stale and unprofitable promises of the Liberals, but to judge for themselves. The Liberal party were no more likely to give them land without charge than he was—(laughter).

The vote of thanks was heartily carried, as was also one to the Chairman, and to Mr. Geo. Hall for the use of the barn. Three cheers for the Queen, Chairman and Mr. Mosey were given.