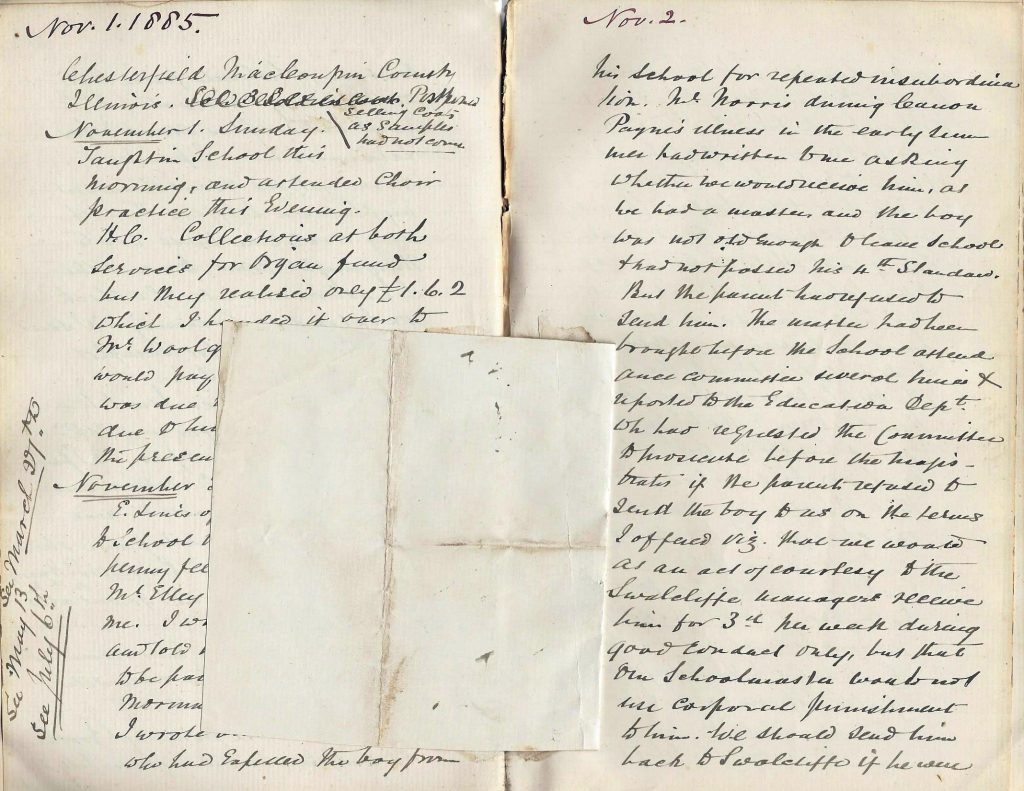 E. Lines of Swalcliffe sent boy to School this morning with a penny fee – and this letter. Mr Elley sent the boy down to me. I wrote a note to the mother and told her the fee would be 3d to be paid every Monday morning. See March 27th, May 13th, July 6th. 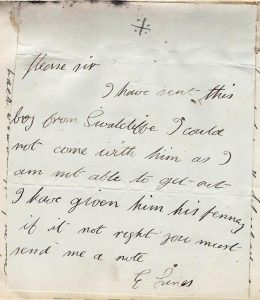 Please sir – I have sent this boy from Swalcliffe I could not come with him as I am not able to get out I have given him his penney if it not right you must send me a note. E Lines.

I wrote also to Canon Payne who had expelled the boy from his school for repeated insubordination. Mr Norris during Canon Payne’s illness in the early summer had written to me asking whether we would receive him, as we had a master, and the boy was not old enough to leave school and had not passed his 4th Standard. But the parent had refused to send him. The matter had been brought before the School Attendance Committee several times and reported to the Education Department which had requested the Committee to prosecute before the magistrates if the parents refused to send the boy to us on the terms offered viz. that we would as an act of courtesy to the Swalcliffe managers receive him for 3d per week during good conduct only, but that our Schoolmaster would not use corporal punishment to him. We should send him back to Swalcliffe if he were insubordinate. I told Canon Payne today that I had sent the boy back for 3d, that I was not sure I ought to have offered to take him to receive the benefit of the Sibford Charity without charging the actual cost of each child on the average to the School funds but that if I had done so it would have nullified my offer – I calculated 1d as the fee which our labourers pay for their children and the 2d extra cost of books etc with which he would be supplied, adding that I had in all cases but one charged 3d to outsiders.

Received £13.10 from Eccleiastical Commissioners for half year’s stipend less 9/- income tax at 8d in the £ thanks to the Egyptian policy of our late Liberal Government.

Harry left for tutorship in family of Mr Brunder, Pitgaveny, Elgin. Webb drove him to Banbury for 9.45 pm train G.W.R. to Birmingham, thence to Crewe, Perth and Elgin where he hoped to arrive at 11.35 on Tuesday morning, travelling all night.

I lent him £4.10 for his railway fare which he is to repay when he gets it from Mr Brunder at end of 3 months if he suits. I also supplied him with warm underclothing and new boots.

Met men at Schoolroom this evening and sold 3 military greatcoats out of the five sent me as samples.

John Horsman’s wife, sent to me from Shutford whither they removed a month or two back, her grand daughter, child of George Horsman of Wandsworth, a girl of aboput 15, to say they were very badly off, the father (John) could not get anything to do; the boy Harry is out of work – they have neither firing nor food and no friends in Shutford to keep them. Would I speak to the Guardians on their behalf. I said they must apply to Bonner, and the Shutford Guardian would have to speak for them. I had no funds with which to help those not living in my parish. But for present emergency I sent them 2/6. It appears they want to come back to Sibford, but as they never paid their way here when they had plenty to do with, the Sibford people do not care for them and the owners of cottages decline to let to them.

Visited Benjamin Aris, Sergeant Harris (late of Brailes) now residing at the Friends’ Mission room cottage to take charge of the Meeting house and ground of the Mission room. I did not see him, but saw his wife and her father who is living with them. The husband was a colour Sergeant in the Marines and went through India with the Prince of Wales.

Mr Davies called this evening and went up to the Schoolroom with me to show the military overcoats.