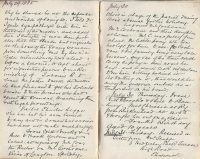 Received a letter from Mr Staff, 6 Hedgerley Park Terrace, High Road, Chiswick, my co-executor and trustee in the Brown Estate – saying that William the youngest boy will come of age next month – that they all wish their property to remain intact and transferred to them jointly. Mr Staff does not think this will do. I wrote a letter to each of them asking what their wishes were in the matter.

Received a letter from Cassie Heming saying that her sister Adelaide, recently home from school in Germany wished to get a situation as governess and would be glad if I would act as referee. I replied that I would say all I could say with truth – but not more : for however estimable Adelaide Heming may be, I have only seen her once and that was several years ago.

Frank had Oddie children and others to tea. Mr Oddie called and I walked with him to Hook Norton and back.

Miss Summerton called for my signature to her Annuity Receipt.