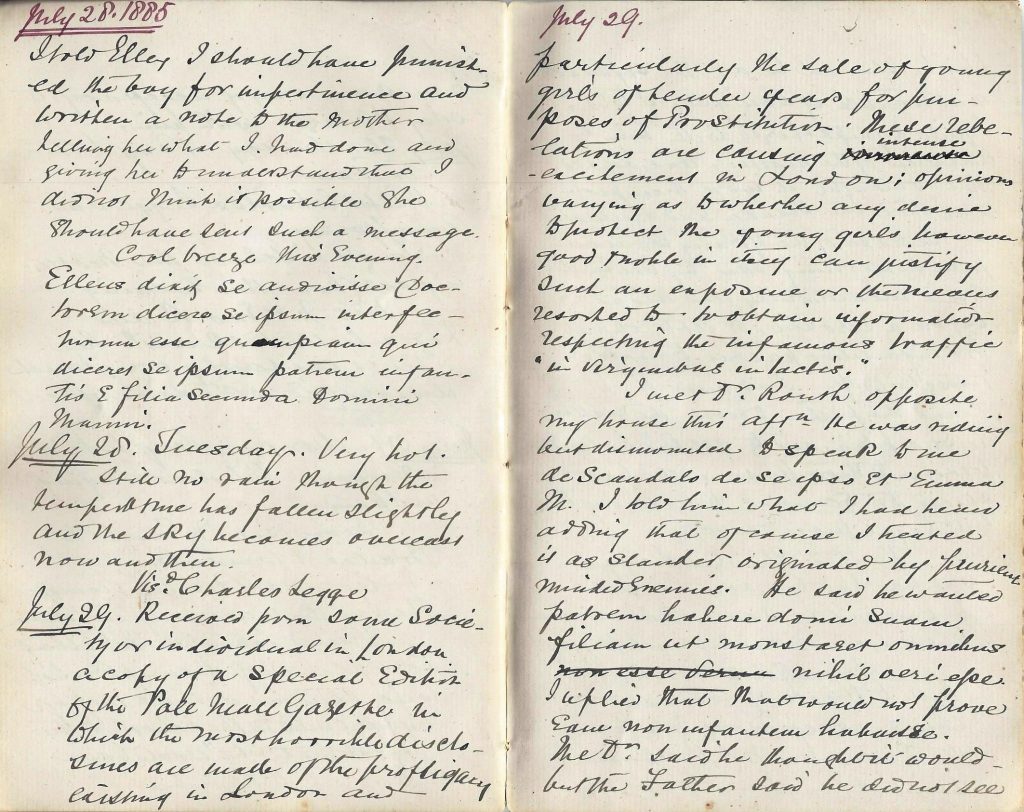 Received from some Society or individual in London a copy of special edition of the Pall Mall Gazette  in which the most horrible disclosures are made of the profligacy existing in London and particularly the sale of young girls of tender years for purposes of prostitution. These revelations are causing intense excitement in London; opinions varying as to whether any desire to protect the young girls however good and noble in itself can justify such an exposure or the means resorted to to obtain information respecting the infamous traffic “in virginibus intactis.”

I met Dr Routh opposite my house this afternoon. He was riding but dismounted to speak to me de scandalo de se ipso et Emma M. I told him what I had heard adding that of course I treated it as slander originated by prurient minded enemies. He said he wanted patrem habere domi suam filiam ut monstaret omnibus nihil veri esse. I replied that that would not prove eam non infantem habuisse. The Doctor said he thought it would – but the father said he did not see why he should be at the expense and trouble of doing so. I told Doctor I quite sympathised with him in that view of the matter : and added that I thought it more than probable that the slander had originated at the home of the young woman from something said by her in a letter incautiously read aloud, before a servant, or left about for inquisitive persons to make mischief of. I advised R to leave the father to settle the matter de sua filia, and to get his solicitor to write to those persons who had spread the scandal threatening them with legal proceedings.

patrem habere domi suam filiam ut monst(r)aret omnibus nihil veri esse – the father to keep his daughter at home to demonstrate that there was no truth in the story.

eam non infantem habuisse – she has not had a baby

de sua filia – of his daughter

Visited Charles Legge who has had his arm lanced today and is somewhat easier but does not make much progress.

Drove Edith Brooks and Bell to Hook Norton and called, at request of Mr Cox, the Rector, on Mr Cochrane, Vicar of Langton Spilsby, who is in charge of the parish during Cox’s absence for his holiday. We found Mr Cochrane, Mrs Cochrane and their daughter at home. Mr C. was full of fun about the little pony which Cox had left for them to use. Cochrane and his family being very tall persons, any one of them could carry the pony in their arms he says – and it would look ridiculous to see him sitting behind it. As to sitting on it, that would be out of the question unless as a tailor sits on his board.