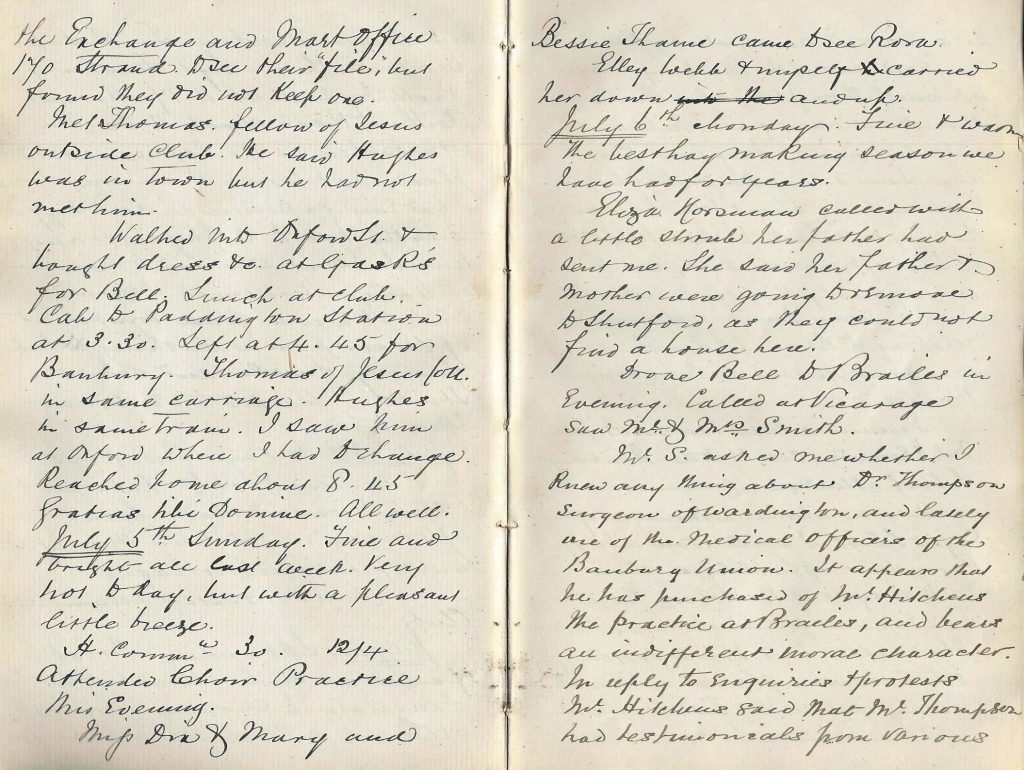 Fine and warm. The best hay making season we have had for years.

Eliza Horsman called with a little shrub her father had sent me. She said her father and mother were going to remove to Shutford, as they could not find a house here.

Drove Bell to Brailes in evening. Called at Vicarage, saw Mr and Mrs Smith. Mr S. asked me whether I knew anything about Dr Thompson surgeon of Wardington, and lately one of the Medical Officers of the Banbury Union. It appears that he has purchased of Mr Hitchens the practice at Brailes, and bears an indifferent moral character. In reply to enquiries and protests Mr Hitchens said that Mr Thompson had testimonials from various persons and among them the Guardians of the Banbury Union. Mr Smith thought that the Board should not have given him such a testimonial. I replied that as a Board they probably knew nothing about him beyond the way in which he had performed his official duties, and that consequently they could not well avoid giving him a testimonial relating to them. Mr Smith is very much grieved at his going to Brailes.

I received a letter last week from Mr Heming, clerk to the Banbury School Attendance Committee asking me whether, as manager of Sibford School I would admit a boy Harry Lines, of Swalcliffe, whom the Managers of the School there had expelled for disobedience etc. The matter had been referred to the Committee of Council on Education on my motion, by the School Attendance Committee because the boy was reported as absent from school, and the parents had been summoned before the Committee. I had previously informed Mr Norris, Canon Payne and the Committee that the School master here and myself would admit the boy out of courtesy to our neighbours, but that if he showed himself rebellious here, Mr Elley would not cane him and thus render himself liable to be summoned before the magistrates for an assault, but that we should send him back to Swalcliffe.

The matter is an important one from several points of view and I therefore wrote a carefully worded letter in reply to Mr Heming’s enquiry, to the same effect as that above stated.