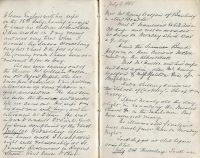 Took an hour’s walk before breakfast which I procured at St James’s Hall Restaurant and then returned to Club to write some letters. In afternoon I went by ‘bus from Oxford Street to St Martin’s le Grand. Walked up Aldersgate Street to get a tram car for the Angel. The stinks in the way were almost overpowering. Mem – walk in the middle of the road next time. Visited Dr Milburn, Claremont Square. He was out, but saw Mrs Milburn.

Took taxi from the Angel to Clephane Road No. 4 and called on Mr and Mrs Woolcott at their new house, which is an excellent one for £50 a year. Took tea with them.

Walked thence to Seven Sisters Road. Took tram to Finsbury Park. Called on Mr and Mrs Rugg, Finsbury Park Road. Saw them both and Annie Martin. Took supper with them. Left Finsbury Park by rail at 11.17. Arrived Portland Road about 11.30. The atmosphere at the last mentioned place was worse than anything I had ever experienced, and sufficiently bad to asphyxiate any human being who had to remain an hour or two in it I should think. It was a dense compound of steam from a washing tub, factory smoke, and sewer stinks. Walked to Club, and thence to bed.