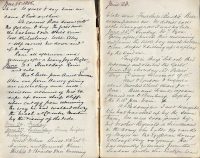 Went to London to enquire about invalid wheelchair for Rosa. Bell and Frank accompanied me to Banbury. Left by the 1.18 pm train.

At Paddington I met Wingate who had travelled up by the same train. We were soon joined by his brother Reginald, a Lieutenant in the Army who holds the rank of Major in the Egyptian Army although very young. He has recently returned from the Soudain with Sir Evelyn Wood. He brought down General Gordon’s diary, recently published, from the interior to the ships at Assouan? and is, by all accounts, a very promising young officer. His brother William has received instructions from the Indian office to go out to Belgaum and Dharwar as soon as possible if he would like the post. It is just the post he has been desiring and been using all his influence to get. He has to present himself before the Medical Board tomorrow.

We all drove to the Clergy Club where I had arranged to stay, having a bed provided at 9 Maddox Street – the Club chambers all being occupied. We had luncheon at the Club – then the two Wingates went to execute their respective engagements. William W. rejpoined me at the Club at 7, his brother having accepted an invitation to dinner with his old colonel.

We went to the Inventions Exhibition where we were much pleased with the illuminated fountain. His brother was there with his military friends, but we did not come across them. We walked back as far as Apsley House together – where we separated, W. going to the Army and Navy Hotel in Victoria Street where he had put up and I to my rooms.