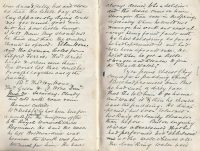 Cloudy and cold with some rain.

William Webb (who has been here for a week) called in the uniform of the 6th Royal Warwickshire Regiment. He said the reason he left Bredwardine was because the work was far too much for him. He had always desired to be a soldier and the desire came on him stronger than ever in the Spring, especially when he could not manage his work and was always being found fault with. He liked soldiering so far as he had experienced it and had not been reproved once. He hoped when he got a little stronger and stouter to join the “Black Watch.”

Ezra Green’s eldest boy came for a pudding which Bell had promised him. But he had such a dirty face that she told him to go home and wash it, then he should have the pudding. He disappeared; but soon returned looking certainly cleaner than before. But on enquiry it was ascertained that he had performed his “ablutions” at the well whence all the drinking water used in my household is obtained.

Fred Horsman called. Bell and I called at Hannah Keen’s this evening, but she was gone to bed.

We called at Long, the Baker’s and stayed some time as a shower came on.

I afterwards attended a Committee meeting of the Sibford Brass Band.

Joseph Webb was elected a full member and Thomas Fox and William West probationers. Two members, John Lamb and William Green were fined 6d. each for being absent from practice.

I told the members that it was inadvisable for them to accept invitations to go to the public houses to play, and that if they desired to go there for refreshment they should leave their instruments at home.