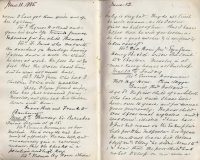 Buried Thomas Holland age 8. The first child of our school who has died since I have been here, over 10 years, and for several years previously. The poor child was I fear much neglected – and was semi-idiotic. I have had to put his name on the Exemption list for H.M. Inspector 2 or 3 years. He could not learn his letters and told Mr Elley “he didn’t want to”. I hear that the poor child had no bed to sleep on nor even a mattress – only some old clothes. yet the father is in constant work and the family receives considerable help from the charity estates.

Miss Mawle who is on a visit to Miss Dix called this afternoon.