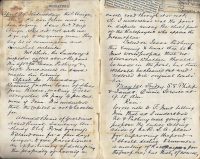 Received further loan of £600 from Bessie, making £1020 altogether. To pay 4 per cent, more if I can. It is understood that the capital is not to be called for.

Attended Board of Guardians, asked Rural Sanitary Authority to let pond business to stand over for a few days longer, to give parishioners an opportunity of discussing the propriety of having a cattle road through it or not, which I understood was the point in dispute among the chief part of the Ratepayers who oppose the present plan.

Called on Isaac Padbury this evening and learnt that he and Inns would propose that no alteration whatever should be made in the pond, but that it should be cleaned out and restored to its original condition.