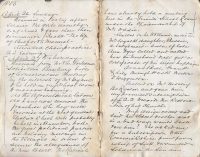 Received from Mr C. Fortescue Solicitor Banbury bills of Conservative Meeting in the interests of Mr Wynne to be held in my school room tomorrow evening.

As the Agricultural Labourers have now received the franchise they will exercise at the next general election which will probably be held in November, both the great political parties are holding meetings in the Villages in  order to secure the allegiance of the new voters. The Radicals have already held a meeting here in the Friends’ School Room under the Chairmanship of Mr Oddie.

Mrs Wyatt’s daughter, Bessie, a Lady’s maid – sister of late Ann Dyer called and asked how the husband could get a certificate of his wife’s baptism.

Drove Bell, Frank and Lily through Hook Norton to Wigginton. Called on Mr Mosley the Rector, and gave him my promised subscription of £2.2 towards the Restoration of his church.

Miss Ainge called and said her eldest brother was in a bad way, would I call and see him? She asked me for a subscription to the Warwickshire fund for relief of sick and wounded soldiers in the Soudain. I gave her 2/6 but told her we should probably have a collection in Oxfordshire for the purpose and that people of our County could not be expected to give twice. Mrs Townsend of Honington had written to her about the matter.