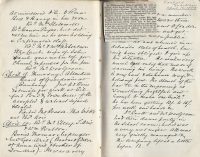 Attended Board of Guardians at Banbury.

Mr. White reported he had inspected the pond at Sibford, which was 57 feet by 25, with an average depth of water 9 inches. It was in a filthy condition, was a nuisance at the present time, and in hot weather would be injurious to health. He suggested the pond should be cleaned out and reduced in size.

The Rev. E. T. Stevens said the matter had been brought before the vestry meetings of the parish for the past ten years, during which time it had been getting worse and worse. The parish was quite willing to bear the expense, and had authorised him to say so.

Mr White handed in an estimate of £16 to do the work required from Mr. John Adkins, which was accepted by the Board, and the work was ordered to be done.

This was the last meeting of the old Board. The new Board will meet to-day (Thursday).