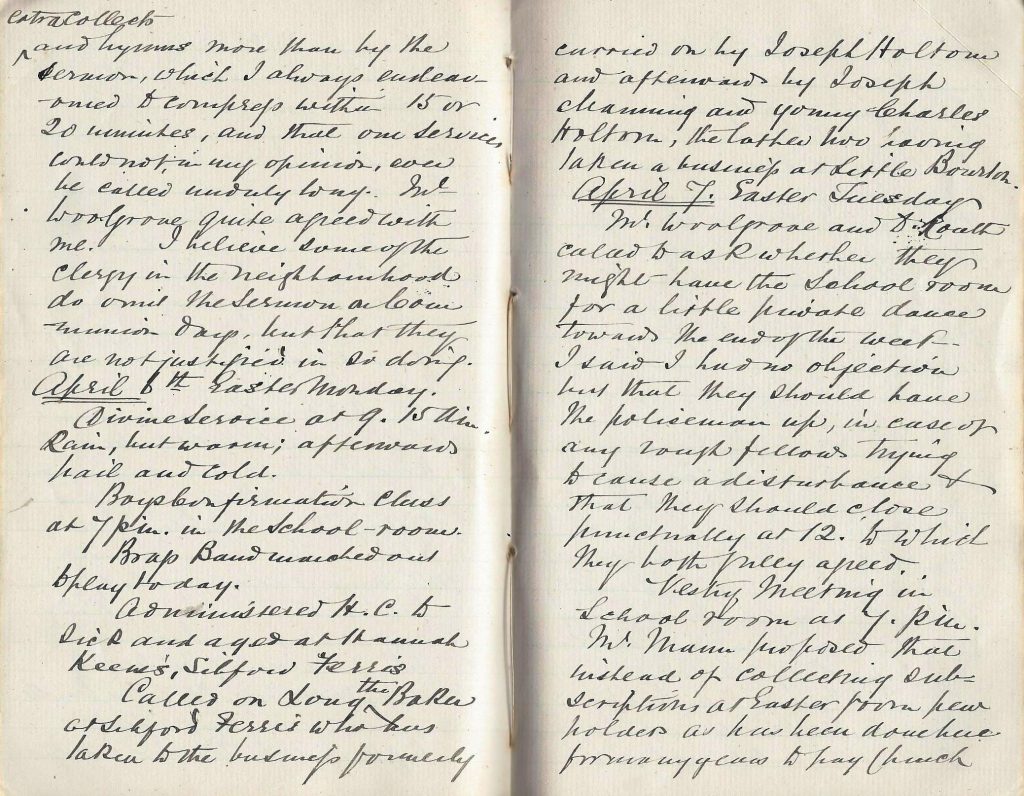 Mr Woolgrove and Dr Routh called to ask whether they might have the School room for a little private dance towards the end of the week. I said I had no objection but that they should have the policeman up, in case of any rough fellows trying to cause a disturbance and that they should close punctually at 12, to which they both fully agreed.

Vestry Meeting in Schoolroom at 7 pm. Mr Mann proposed that instead of collecting subscriptions at Easter from pew holders as has been done here for many years to pay Church expenses, we should have a quarterly collection in Church. I expressed myself as willing to agree the arrangement if the Vestry desired it, but that I was pretty sure it would not answer. I added that if I gave my usual subscription at the collections I should not be able to give any more to make up any deficiency at Easter. The matter was well discussed and in the end Mr Mann’s proposition was lost.

Mr Mann was then nominated as People’s Churchwarden, after I had reappointed Mr Woolgrove as my warden – but he declined to serve again and nominated Frederick Inns as people’s warden. There being no other nomination, I declared Mr Inns duly elected.

Mr Mann then proposed that the people’s warden should collect the subscriptions and pay the bills always before Easter; so as to present the vouchers to the Vestry which was carried. Mr Woolgrove has done the collecting etc for many years, but has done it after the Vestry meeting instead of before – as I have always said should have been done.

Ben Messenger told someone (who told me) that he had been a great fighter in his day and would fight any man but that he once struck his mother and felt more ashamed of that than of anything else he had ever done in his life.