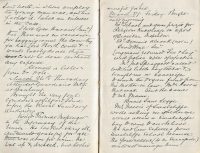 Visited School and gave prizes for Religious Knowledge on report of Diocesan Inspector.

Longmans returned “See and Say” with polite note of rejection.

Mr John Spraggett called with his little boy Victor and brought me a sovereign towards the organ fund from his mother in law – Mrs Harris that was. Sent the same to Mr Mann.

Mr Norris of Swalcliffe wrote asking me whether we would allow a Swalcliffe boy to come to our school. He had been expelled from Swalcliffe School because the Governesses (4 in succession) could not manage him. I consulted with Mr Elley and replied that we would give the boy a trial, but that if he wanted “a good thrashing” we must send him back to Swalcliffe to get it.

Mr Shilson of Banbury called to introduce to me Mr Lawson of Wardington who is a candidate for the post of Medical Officer for one of the districts now vacant, in the Banbury Union. He seemed a very superior and able man and I was glad to be able to promise him my vote.