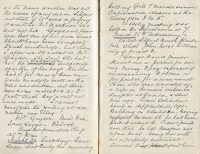 George Harris junior showed me a petition for raising money to pay expenses of endeavouring to obtain a free pardon for a man named Cross who was convicted of a rape on Bonner’s imbecile daughter at Wroxton a short time ago. Cross’s solicitor, being in difficulties, left Banbury on a sudden, having neglected the case which he had been paid to attend to. Cross’s friends aver that he had therefore not a fair trial – being left without a properly instructed counsel to defend him. Lord North, in whose employ the young man was, and his father is, takes an interest in the case.

I told George Harris (junior) that there was no occasion for begging round the country for that Lord North could and would easily do all that could be done without any expense.

Received a letter from Dr Hole.