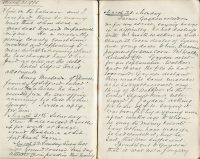 Farmer Gaydon called on me for my advice, saying he was in a difficulty. He had dealings with Mr Mark Walker, a substantial Corn dealer of Tysoe, and going down to him to receive payment for some corn. Mr Walker deducted £10. Gaydon asked for an explanation. Walker said it was the £10 he had borrowed. Gaydon declared there must be some mistake as he had not borrowed anything of Mr Walker. So the latter showed him a note signed “J. Jaydon” asking for loan of £10 saying it was brought by a young man a few weeks ago to whom he gave the money and would have let him have more if he had wanted it, but he said that was sufficient.

I pointed out to Gaydon that it was not a forgery as the name written was not the name of anyone in Sibford and that if it were a forgery it would be Mr Walker’s loss and not his. Gaydon’s fear was lest one of his own sons should have been tempted to such wickedness, but when I afterwards called on Mrs Gaydon, she said she had not the shadow of a suspicion of either of her boys. Neither had I, for none of them can write nearly so well as the note was written, and there were some mistakes as to facts which they would not have made. I cannot recognise the writing at all, neither can Elley.