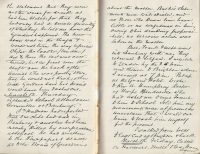 Called on Harcourt, Mills & Co, House Agents on the King’s Road, no. 79, who sent a clerk to show me some furnished and unfurnished houses.

Afterwards called on Mr Dutton Briant, 29 Queen’s Road with whom I had had some correspondence and from there to see Mr William Olding, 4.5.6. Brunswick Road who wishes to let the houses where he has successfully conducted a Boarding School for 32 years. He is a local preacher and lecturer, and his school has dwindled down to a handful of boys. The place was quite unsuitable for me. He was a pleasant and apparently prosperous but somewhat bumptious man.