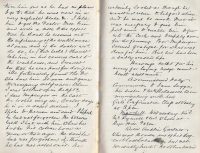 Visited Austin Gardner who was thrown out of his dog-cart last Saturday, but not seriously hurt. He volunteered the statement that they were not the worse for drink as had been stated, for that they had only had a small quantity of whiskey. He told me how the accident happened. The new horse was in the shafts and would not turn the way required whilst the leader (tandem) did and thus the cart was overturned, but so fixed were the shafts over the back of the animal who was partly down that he could not kick, otherwise Gardner said his brains would have been dashed out.