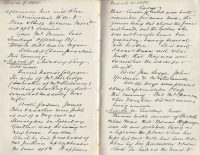 Thomas Webb, carrier of Burdrop called and said that Thomas Messenger was ill and destitute lying in a loft over the place where he kept his cart and which had been let to him by his predecessor and from which he had not the heart to turn him out as he had no place to go to, that he was now in a very neglected state etc. I told him to get the Doctor to see him and write a note to the effect that he should be received into the infirmary of the workhouse at once, and if the doctor would do so, he (Mr Webb) should take him in his covered cart to the workhouse, and I would see that he was paid for doing so.

He fortunately found the doctor who saw him at once and gave the necessary certificates. When I was at Burdrop in the afternoon I saw Messenger in the cart. He looked very ill; Doctor says he is in a rapid decline. I spoke to the man and said I hoped he had not forgotten the serious talk I had with him when he broke his collar bone a year or two ago. he said he had not forgotten it, though he had not acted on it. He certainly looked as though he would not return to Sibford alive and he was so weak that it was necessary to give him port wine to enable him to get into the cart, and to supply some for the journey. Poor Messenger seemed grateful for what was done for him. But his has been a sadly wasted life.

Hewings called for his money for laying hedge round Heath allotments.

Administered Holy Communion to Jane Legge, her sister and Mrs Shelswell communicating with her.