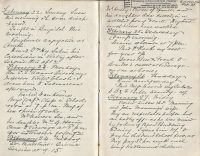 Visited Widow Thomas Manning and John Manning’s wife. They are respectable people but are badly off, as he was ruined by failure of Oxford Building Society. I gave him 10/- to pay his children’s School fees, as they pay 3d per week each being tradesman’s children.

William Hall called for money for hedging at the Heath Farm.

Took tea at Miss Dix’s with their cousin Rev. Edward Dix and his sister. Mr Mann and his son Walter were there – Walter having been formerly a pupil of Mr Dix’s.