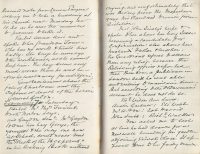 Visited Mr Thomas Timms, Hook Norton Leys, and Gaydon senior. Mrs Gaydon told me her boy George, the youngest and the only one now at school, could never read the “Wreck of the Hesperus” in his Reading Book without crying, and unfortunately that was the very piece the Inspector gave his standard to write from dictation.

Met John Lively’s wife and spoke to her about her boy Jesse becoming a candidate for confirmation : also about her husband’s father and mother. The Guardians refuse to allow them any relief because the Relieving Officer reported that their son, a publican in London said he was able and willing to maintain them. But according to the old woman’s account he does not do so.

Fox asked me to look at line he had drawn for a new wall bounding his garden adjoining School Close. It appeared to me to be fairly drawn.

Called on John Holtom and asked him whether he was going to allow the summons I sent him for allotment rent to be heard in court. He was very civil and begged I would not appear against him. He had a pig fattening “all his own” – would I look at it? I would and did. It would be ready to kill on a certain day and then he would pay the money.

I told him he must send me a written acknowledgement of the debt, and promise to pay in full together with cost of summons – and if he did so I would not appear against him. He wrote up the note in the evening and redeemed his promise by the day named, £1.19.6 in all.