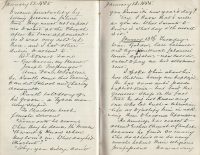 William Golder, late Labourer and Agricultural Labourers’ Union agitator – now carrier – called to pay me his allotment rent. I spoke to him about his two children being unbaptized. He has some anti paedobaptist views – but laid the greatest stress on the fact that he did not know anyone who led such a Christian life as to justify him in asking them to become Sponsors.

He himself has ceased to attend either Church or Chapel because he finds so many who do attend are so very much behind their religious professions. He was very polite, but very foolish. I said what I thought right at the time, and added something about the claims of the Church as against Dissent. He said he valued the Clergyman very highly that the Clergy of the Church of England were a “pillar of learning” in every parish in the land.