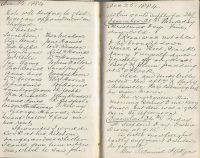 A little snow fell, but hardly sufficient to whiten the ground.

Visited Mrs Shelswell, not at home, but I saw Marion who had her face wrapped up on account of neuralgia.

Mt Joseph Pettipher called this evening and asked me whether I would apply to the Postmaster to give us a Money Order office, or at least the opportunity of purchasing postal orders.

Harry went to Mr Willy’s at Epwell to dinner at 6.30 by Mrs Willy’s invitation but contrary to what he knew were his mothers and my wishes. He returned early about 9, and told me Mr Willy got into an almost ungovernable fury with him because he declined to sing – told him he was no gentleman, and that I was no gentleman as I had not called on him – which was a mistake, as I have called several times, but have no intention of doing so again. He seems to have ordered Harry out of the house. The latter says Willy was drunk.