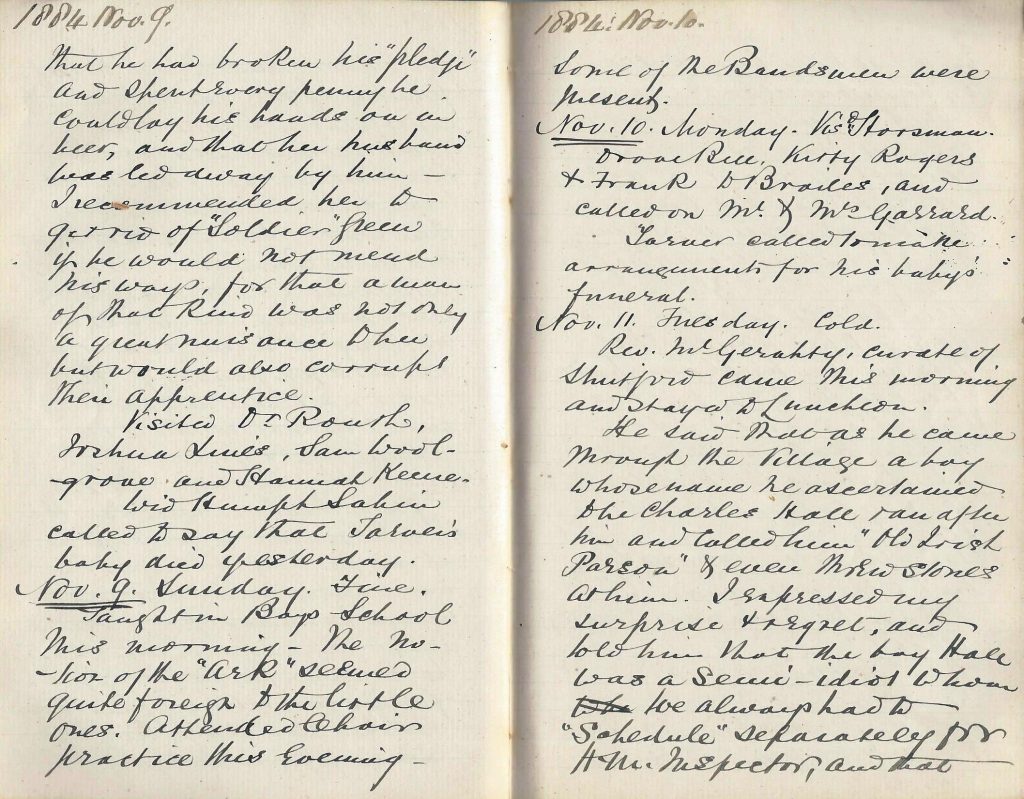 Rev Mr Gerahty, curate of Shutford came this morning and stayed to Luncheon. He said that as he came through the village a boy whose name he ascertained to be Charles Hall ran after him and called him “Old Irish Parson” and even threw stones at him. I expressed my surprise and regret, and told him that the boy Hall was a semi-idiot whom we always had to “schedule” separately for H.M. Inspector, and that he must have been set on by someone else.

On subsequent enquiry I found it was Ezra Green’s eldest boy about 8 years old who had set him on – this boy’s mother is, I fear, an abandoned woman and is from Shutford where she had a very bad character. On going to her house she told me her husband had beaten the boy for his bad behaviour. I saw the boy Hall and spoke to him about the matter. The boy cannot speak plainly.

“Why did you behave like that to the gentleman?”

“He kept swarving at us.”

I could not understand what the boy meant, and appealed to the children standing by for an interpretation – Lucy Hammond replied

“Please Sir, he means that the gentleman swore at them”

“Nonsense, he did not do that”

“Ess he did” replied Hall.

“Nothing of the sort, and mind you don’t behave in that way again.”

“Please sir he always throws stones and calls after us girls” said Lucy Hammond – who had taken Hall to task once or twice during the conversation for having a grin on his face – and Hall had, I thought taken her reproofs very meekly and properly. But the boy could not keep the contortions of his face. His mother was a bad sort of woman – and his father is not “compos” altogether. Hall has a sister, and a very bad pair of children they are – a clear case of evil heredity from the Grandmother Sally Hone downwards.

The doctor sent me a note about a boy Hone bastard son of Thomas Holland’s wife – stating that the boy ought to be at school – and that he had written to the School Attendance Officer to direct attention to the case – the boy had “impetigo”? on head. He had told the mother to wash it frequently with soap and that it would soon get well, but that the mother would not only not do it herself, but would not let the boy do it in order that the head might keep bad and that she might thus keep him away from school.

I went up to the mother immediately. In reply to my remonstrances about the boy being away from school as the Doctor said in his note the boy ought to be at school, she said the Doctor had given him a note last week to take to Mr Elley saying he was not fit to go to school. That she would send the boy to school, but that she thought Mr Elley would send him back – if he saw his bad head – and the boy must wear his cap in school.

“But you can make him a cap for the purpose”

She said she would do that.

“Have you carried out the Doctor’s orders?” She said she had.

“Well, the Doctor tells me the boy ought to be at school; and that you do not carry out his instructions. If you do not do your duty by your children and send them to school, I shall feel it my duty to take your name off the Coal and Clothing list and leave you to appear before the Trustees and explain your conduct.”

She was very humble and said that she had done her best to carry out the instructions she had received, and would send the boy to school tomorrow with a cap to wear in school.

In the evening I met the Doctor just as he was going into her house. I spoke about his note. He replied that he only knew from what the boy himself had said, that his instructions had not been carried out.

“Is the sore head contagious, Doctor?”

“Yes, very, ‘impetigo contagioso’ it is called, but if he wears a cap no other child is likely to take it.”

“But other people would naturally object to their children sitting next to a boy who had a contagious disease on hom, and I would rather you gave him instructions not to go to school for the present and tell the woman to get the head well as soon as possible : which he promised to do.

He expected the woman would be uncivil with him and seemed rather surprised that I had taken up the matter so promptly and openly. I told him I could not allow such conduct to go on, if I had the means of stopping it.

I saw him again after he had seen the woman. He said she was very civil – and had declared that she had carried out his orders and her mother had seen her wash the boy’s head etc.