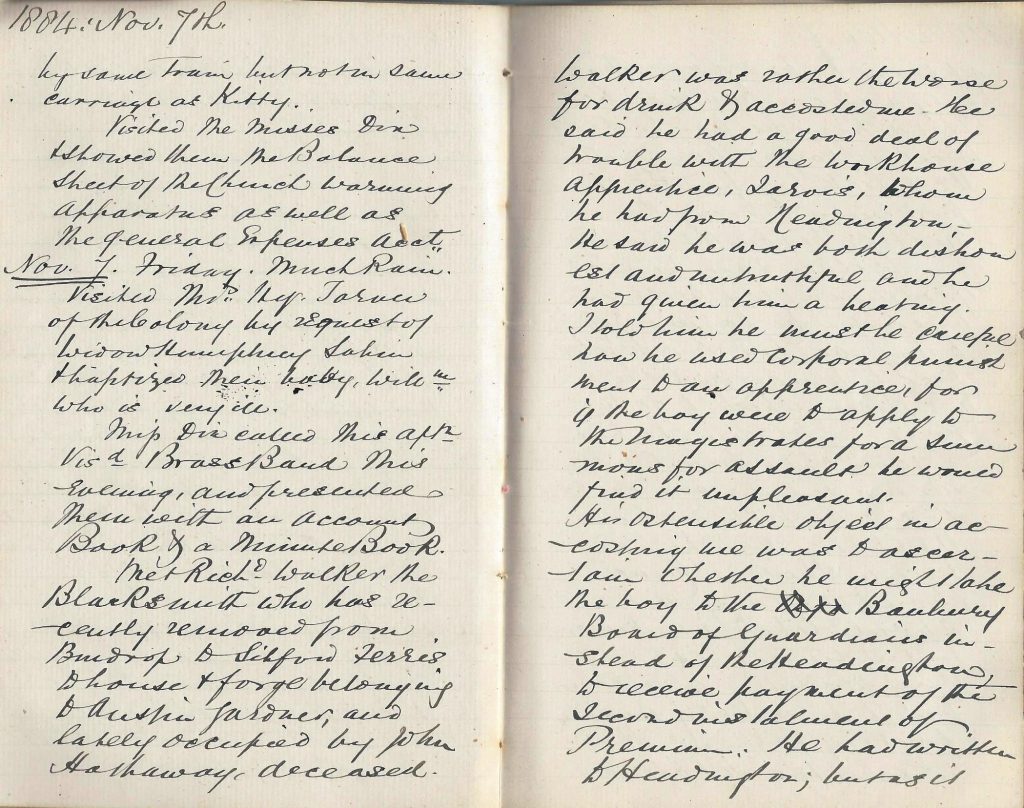 Much rain. Visited Mrs Henry Tarver of the Colony by request of Widow Humphrey Sabin and baptized their baby William who is very ill.

Visited Brass Band this evening, and presented them with an Account Book and a Minute Book.

Met Richard Walker the Blacksmith who has recently removed from Burdrop to Sibford Ferris to house and forge belonging to Austin Gardner, and lately occupied by John Hathaway, deceased. Walker was rather the worse for drink and accosted me. He said he had a good deal of trouble with the workhouse apprentice, Jarvis, whom he had from Headington. He said he was both dishonest and and untruthful and he had given him a beating. I told him he must be careful how he used corporal punishment to an apprentice, for if the boy were to apply to the magistrates for a summons for assault he would find it unpleasant.

His ostensible object in accosting me was to ascertain whether he might take the boy to the Banbury Board of Guardians instead of the Headington, to receive payment of the second instalment of Premium. He had written to Headington; but as it appeared he had done that only a day or two ago, I told him he had better wait a day or two until the Clerk had had an opportunity to bring the matter before the Board.

Walker said he was getting on very well in business – he earned 30/- today and had 5 or 6 jobs to go to tomorrow and did not know which to go to first. I told him he had a good opportunity of saving money and should do so. He talked about the Choir – said he had been in Shutford Church Choir for years and should like to be in mine – but I did not respond very warmly as I knew him to be a very unsatisfactory fellow. He was a tee-totaller for a short time when his apprentice first came to him and consequently I gave him a good recommendation to the authorities of the Industrial School where the boy then was. But Walker was not in a condition to receive anything like a reproof this evening, so I said nothing to him about his vicious propensity. He asked me to call and see his wife and speak with her about the boy.