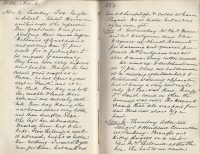 Visited Horsman and his wife who expressed their gratitude to me for pleading their cause before the Board of Guardians and getting them 5/- per week for a fortnight, to be renewed if necessary. They have been very improvident people. Though he has earned good wages as a Mason, he has spent a great deal in “drink” and is in no club. Now they are both ill, unable to leave their beds, and are entirely destitute. Their boy Harry, who is at home, earns very little, and their daughter Eliza who left her situation to nurse them has to be kept. Five shillings a week is not much, but it is better than nothing. I wanted to get more for them, but could not.

Went to Swalcliffe and called on Canon Payne. He is better but not out of his room yet.