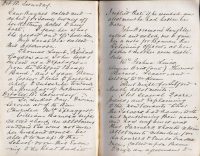 William Barnes’ wife called about an allotment and said she was not sure her husband would be able to come up to the Schoolroom this evening to the Rent Audits. I replied that if he wanted an allotment he had better be there.

John Horsman’s daughter called and asked me to give her a note for Bonner, the Relieving Officer, as her father and mother were destitute.

Rent night for Sibford Heath Allotments. I let several 2 acre pieces, and explaining to the new tenants what the Tarvers had done, without mentioning their names, and how unfair it was that Farmers should retain allotments intended for Lanourers and small tradesmen, called upon them to sign an agreement to give up peaceable possession on receiving six months to do so from the Treasurer to the Trustees, the notice to expire at Michaelmas. They all saw the force and reasonableness of the request, and  all, new and old two acre tenants, signed quite cheerfully.