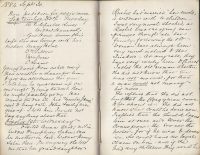 Visited Anna Aris, not in; Widow Humphrey Sabin – saw her mother in law, Widow Sabin, there. On enquiry she told me that her granddaughter Rachel had “married” her uncle, a widower with 4 children. I was very much shocked, as Rachel was one of my confirmees though all her family, following the old woman have always been very much inclined to the Quakers – at any rate, they have rarely been to Church. I asked the old woman whether she did not know that she was not married, for that a man could not not marry his niece.

She replied that she did not but that the Clergyman came to her about it. She did not know what could be done now. I replied that she should leave him at once and sever the connexion, the sooner the better – for if he were to desert her, she could have no legal claim on him – and if she had any children they would be bastards.

The old woman talked a great deal of cant about the Bible being sufficient, but I told her that a good many people who talk like that either do not know what the Bible teaches or wrest it to their own destruction.

She talked a good deal about where she had been staying in Bath with a widowed daughter – and one would have thought she went regularly to Church and knew all about the Clergyman. But on enquiry she would not give me either the name of the parish, or the Church or the Clergyman. She certainly has not been to Church six times since I have been at Sibford, though for the most part quite able. And yet before I came to reside here she had the impudence to tell me that “Christ’s flock had been badly shepherded.” When her husband died I attended him, thinking him a member of the Church of England – though I knew he was a very unworthy one. She was lying in bed whilst he was in an easy chair. When I spoke about the Holy Communion she said they had no need of outward forms and ceremonies. I was considerably astonished as I had always understood she was a communicant, but I prayed for them and left. The man died the next day; and I think she has not received the Holy Communion since.

Visited Thomas Lamb’s widow
Richard Walker,
John Horsman and wife; both ill in bed; he in one room, she in the other.
Jane Legge
Susan Hunt.

Met the young men who are forming Brass Band and read them the Rules which I had drawn up. They were very willing to submit to all proper restraint and asked me to be President and Trustee. I told them I would make a fair copy of the Rules for them. They had Mr Griffin of Shutford who is to be their instructor present.