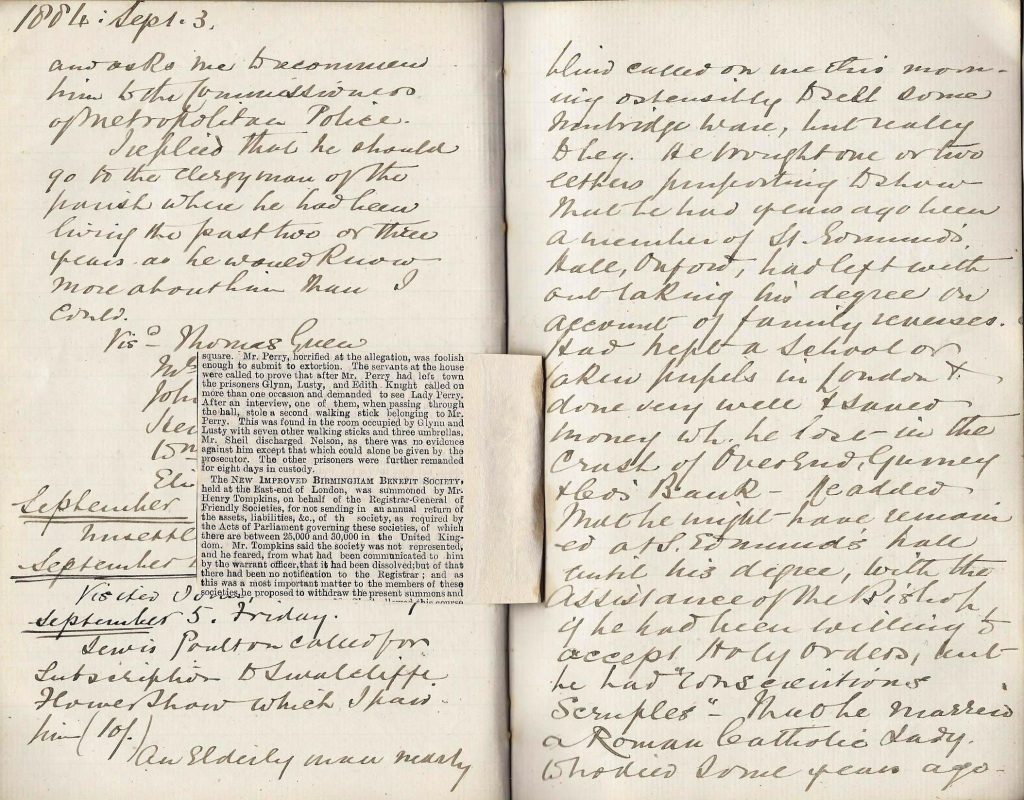 Lewis Poulton called for subscription to Swalcliffe Flower Show which I paid him (10/-).

An elderly man nearly blind called on me this morning ostensibly to sell some Ironbridge ware, but really to beg. he brought one or two letters purporting to show that he had years ago been a member of St Edmund’s Hall, Oxford, had left without taking his degree on account of family reverses. Had kept a school or taken pupils in London and done very well and saved money which he lost in the crash of Overend, Gurney and Co’s Bank . He added that he might have remained at St Edmund’s Hall until his degree, with the assistance of the Bishop if he had been willing to accept Holy Orders, but he had “conscientious scruples”, that he married a Roman Catholic lady who died some years ago, that he had one son some 40 years of age who travelled with him. He was of somewhat feeble intellect and therefore could not get his living. He said the doctors supposed his infirmity to have been caused by an “abscess” on the brain produced by a pin which had been put into his ear when he was a child!! I did not ask why the son could not get a situation where manual strength only was required. The man had a very pedantic mode of speech and spoke of when certain clergymen whom he named had said to him over the “luncheon table”, and of the kindness of Prince Leopold and Mr Collins when he called on the former. He added that he was a candidate for one of the Brothers’ houses at Charterhouse. I did not feel altogether satisfied with the man, as he had been to Mr Oddy on the plea of his connection with the Quakers. But in reply to my enquiry it was simply that he was strongly in favour of “Peace” and though he did not say he was a member of the Peace Society, he spoke of what he had done in it. On further enquiry I found that what he had done, was to write an essay on the subject which had never seen the light. I gave him 2/6, though I doubt very much whether I did right.