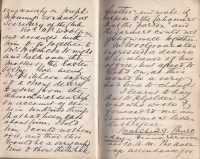 Divine Service at 10 a.m. The average attendance for the week not including officials and children has been about 10.

I heard that the late Widow Golder and the present Mrs M. Poulton were sisters (doubtful).

Eliza Lamb’s baby was buried. Eliza Horsman and Jane Haynes (Mrs Mawle’s servant) in white shawls etc bore the body to the grave. The “mourners” were the mother, her young sister Jane and Charles Lines’s wife.

I think under the circumstances any parade and display of sentiment such as was exhibited by the “bearers” who were not relations of the mother, quite out of place.

The following is a copy of W. H. Golder’s letter (barring Spelling and Comprehension) to “The English Labourer” of March 24, 1877.

Sayings and doings at Sibford

We have received the following letter from Mr W. H. Golder.

Doubtless many of your readers will remember that last Easter Monday was the day on which the worthy President of the N.A.L.U. paid his first visit to the Sibford people. Well, Mr. Arch visited us, but I am very glad to say that it is much better since.

Not a mile from our own village stands the little village of Swalcliffe, the residence of Canon Payne, likewise of H. Norris, Esq. Previous to Mr. Arch’s visit to us this village had stood neutral, no effort having been made at Unionism. Mr. Arch, however, appealed to them so eloquently when here, that many of them at once joined our branch so that we have ever since had a considerable number of quite good Union men from Swalcliffe in our branch.

Notwithstanding all we may say in favour of our branch, yet several of the above named are in our village, especially at Sibford Ferris. There is a farmer there, Mr. T.S. Vedgrove, who has, I think, rather more that his share of these feeble-minds, for he has but two Union men on his farm. I might relate an incident or two which took place between one or two of these men and the said farmer of a most unmanly and humiliating character, but I will with-hold them from your readers, for should I do so, and the lines fall beneath the notice of these individuals, it would doubtless bring a crimson flush to their cheek, even if it did not cause them to emigrate. But however, Mr Arch is going to pay us another visit on the 20th of the present month. We are going to provide a feast also, so that as many of our Union Chaps as think proper can come and have as much beef and mutton and other things as they can eat. Doubtless we shall have the district secretary, Mr. T. Boulton, and other friends to address the meeting. I hope the eloquence of some of these speakers will arouse some of the above named characters, but unless they can sound their voices as loud as that of Big Tom of Oxford, I am afraid they won’t be able to arouse them to a sense of their duty.

The Sibford branch did not send a delegate to the franchise demonstration last year; but, however, all being well, we shall send one at the least this year, and in all probability we shall send two. We have also purchased Holdsworth’s “Handy Book of Parish Laws”, and are now raising the means to purchase the book of Charities. So we mean this year, for the first time, to attend the vestry, and if possible we mean to elect our own churchwarden.

Perhaps it would not be out of place to say a word or two on this subject. Although last year we were able to say that this fund had entirely kept our members off the poor rates, yet at the same time our funds were all spent, leaving us considerably in debt; but however, through a very slight change in the payments, we have been able to get out of debt and to relieve all our sick, and moreover, to save nearly £11, so you see, Sir, by this, that we have gone ahead fine this year. I would first add that when Mr Arch came to Sibford last year I had a dear old mother living with me, and ever since the Union started at Sibford I, being a single young man, thought it my duty to keep my dear old mother off the rates, which I did. But alas! on the 10th of May last she died, and she was carried by four Union men up to our little churchyard, where she now sleeps beside my dear father and two sisters. I have created a neat and substantial stone to be erected to their memory as a last token of my love and respect for them. I would first say that the Union men collected 9s towards my expenses.

In the first place I would say that we have a club known as the Sibford Gower Benefit Club, of which I am a member. It has been in existence something like thirty or thirty-eight years, and has about 120 members in it, and is in a very good position, having between £300 and £400 in the bank. Some years ago we all agreed to give something in order to have a complete set of dinner service, which was bought, so now we have all that is needed to furnish the dinner table in a neat and respectable manner for more than six score people. Until within the last year or two these things have been kept entirely for use on our annual feast day which is always kept on the first Monday in June. Now our Church Singers generally have a supper given them at Christmas, and by some means they have obtained the use of our service at these times, and as they doubtless put them back again in proper order I don’t think there was anything wrong in them having them, but what I want to know is whether they are to have them, and which has the right to them. Why is it that we Union men, who are most of us Club members and have had to find the money to buy the ware not to have them. It will be here understood that we Union men last year knowing that our dinner service had been lent on these occasions, requested the officers of the Club to let us have the use of them at our Easter feast, but no thank you, we had to get ours where we could.

Now just after last harvest the Vicar of the parish with the farmers and other gentry of the villages provided a general harvest home, and may of the labourers and poor people of the parish had tickets presented to them. But who is to find the knives and forks etc for such a multitude?  may be asked. Oh, our secretary, who doubtless gets more by fawning on the rich people perhaps than by actual labour goes round and asks one or two of the Club officers if they have the Club service. So these people who never many of them paid a farthing towards buying them had them. Well, on Monday night the 5th inst. we met to pay our Club contribution, and as I have before said that we are going to provide another feast on the 20th of the present month we agreed to make a second application, which we did, and as soon as I attempted to speak on the subject, our Secretary answered one as if I had been a dog, but I soon let him know that I had set no higher estimate on him than I had on myself. But however we didn’t succeed, for it was plain to everybody that the premier (secretary) was against it, and he has such control over many of our officers that he can rule them with a wink. So of course they were obliged to fall in with this dignified body. Seeing things all in such a state, your readers will doubtless say the best thing you can do will be to get your club fresh officers and so say I also.

We have a few of this class of people in our village too. These people think the Gospel is never so genuine as when preached by the white-robed clergy. Well, for my own part, I have not a word to say against this class of people. For I have known some of them to be very zealous ministers. I have listened to their preaching, also when I have been ready to exclaim “I have been there and still will go, It’s like a little heaven below. My soul has indeed enjoyed some delightful holidays while worshipping in our dissenting places of worship at Sibford. I will relate to your readers one incident which took place recently. Two young men (brothers) from Enstone, held some religious services in our Wesleyan Chapel for more than a week, and to prove their sincerity they provided a large tea, and gave tickets to any one who would accept them. The tea took place in the Chapel. Now these young men have a sister living, at Tadmarton, and one of our Sibford men having occasion to call there one morning was asked by the lady if he went to the tea which her brothers had provided, to which he answered “No Ma’am.” “Oh! How is that?” said she. “Because,” he said “if I had my wife would have blown me up for a week after.” Well, on the 4th inst, as I was on my way to church, I called to see an old friend, and this man chanced to be there. “What! going to church?” said he. “Yes”, I said. “And to Chapel at night?” he asked. To which I answered “Most likely.” He asked if the parson never said anything to me, saying that some parsons would go on at me very much. I related to him the incident I have already mentioned, when he told me it was even as I had heard, saying that had he gone into that chapel, he should never have heard the last of it. Strange things, however, for 1877.