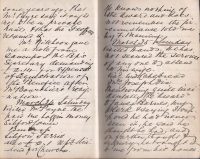 Visited Hands. He has not secured the services of anyone to attend to his wife.

Visited Widow Cakebread, Mrs Joseph Dix. Mentioning quite incidentally the “Award” to James Barnes, ??? clerk and saying I supposed he had never seen it, he said he thought he had, and on further thought and enquiry he brought it to me from his house, saying Mr Bourchier gave it to him some years ago to take care of and he had almost forgotten that he had, as no one had asked him for it.

Preached at Brailes this evening for Mr Smith who was unwell.