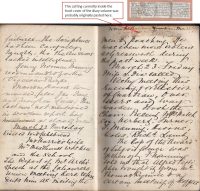 Visited Widow Cakebread, John Harris’s wife, Mrs Meadhurst was there, and the School.

The report of Mr Arch’s speech at the Labourer’s Union Meeting here represents him as inciting the men to poaching. He was even more violent at Greatworth during the past week.

TO CHURCHMEN and CHURCHWOMEN. – The Vicar of a scattered country parsh will be very thankful for CONTRIBUTIONS towards the fund being raised for building a parsonage house. The living (£230 per annum) is in public patronage. Population about 800, all poor. Amount already received £381. Subscriptions may be paid to the Sibford-parsonage account, London and County Bank, Oxford; or sent to the Vicar, Rev. E. T. Stevens, Sibford Gower, Banbury, who will thankfully acknowledge all donations.