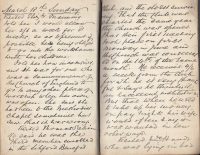 Visited Elizabeth Manning. Told her I would allow her 2/6 a week for 8 weeks, so as to prevent if possible her being obliged to go into the workhouse with her children.

Told her how inconsistent it was for one who was a communicant of the Church of England to go to any other place of worship when her own was open. She said she had been to the Methodist Chapel sometimes but saw that it was wrong.

Visited Thomas Sabin. He said he was the third member enrolled in the Sibford Benefit Club, and the oldest surviving. That the club was started the same year the church was opened. That their first meeting took place on first Monday in June and the church was consecrated on the 14th of the same month. He receives 4/6 a week from the club for which he is very thankful and says he thinks it an excellent institution. But that when he used to take up his money on pay nights his wife would often say it was wanted in ten other ways.

Visited Mrs Hands who was lying in bed looking thinner and weaker than I had seen her before. She talked much less than usual. Her condition as regards want of cleanliness was as bad as ever. Hands said Mary Lively had sometimes been in to attend to her but was going to London for a few weeks. That Thomas Coleman’s wife had been in a good deal of late. I told him that to give him an opportunity of getting to work more regularly and to have his wife looked after more efficiently than hitherto I would pay either Mary Lively or Mrs Coleman 2/- a week to come in and see to her, and that I would continue this for 10 weeks if necessary. I don’t think his wife will last so long.

Visited Widow Cakebread found her better and quite comfortable, but still in bed.

Visited Mrs Ellis. Her husband is much the same, but wants to get up and come down stairs. His wife thinks he is not strong enough and as he cannot walk across his room I advised her not to attempt to get him down stairs alone for fear of an accident.

Attended Choir practice this evening. Gascoigne (carrier) was there for first time.

Visited Miss Dix this evening. Told her what I had done for Elizabeth Manning and Mrs Hands in order that charity might not be wasted by “overlapping”.

She said that Mrs Hands had expressed her desire to go to the workhouse infirmary if they would take her in, but that her husband would not hear of it. Also that she had complained to Mrs Shelswell of his having been “drinking” a good deal a week or two ago and coming home drunk.