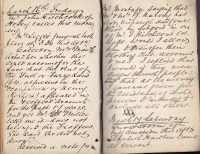 Called on Mrs Mawle. Asked whether she could account for the fact that the rent of the Fuel or Furzeland (£10, at present in the occupation of Henry Herbert) appeared in the Feoffees  accounts for the past 17 years, and yet Mr Miller tells me it does not belong to the Feoffees. She said she did not know.

Received a note from Mr Montagu saying that Mr and Mrs Harvey had left his parish and come to live in Sibford in one of Mr J Hitchcox’s cottages. Would I allow him to transfer their clothing club account to me? I replied that I would if they were decent church people and that as the money I gave was given for the assistance of such persons I intended to exclude all others.