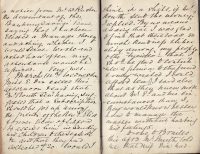 Miss E. Dix called this afternoon and said that Mr Routh Senior having suggested that a subscription should be got up among the friends of the Rev. G. Eliot former Vicar of Sibford to assist him in sending his children to the seaside etc. and that they had collected £20. Would I think it a slight if Mr Routh sent the money? I replied “By no means” adding that I was glad to find that there was so much kindness and liberality among my people and the “Friends”: that I should be glad to contribute a guinea to the fund and only wished I could afford ten. I said also that as they knew more about Mr E and his circumstances than I, they would know better how to manage the matter without hurting his feelings.

Drove to Brailes this afternoon. Mr Smith told me that Miss Dix had sent him a copy of the last letter they had received from Mr Eliot in the hope that some at Brailes and Sutton who knew Mr Eliot when he was curate at the latter place would help. He told me that Mrs Eliot had no fortune, that she was daughter of the late Mr Watling, Rector of Tredington and formerly a fellow of Jesus College Oxford.

Mr ?Limson? of Stow-on-the-Wold, uncle to Mr Robert Braddell, drove over this afternoon – we were nearly all out when he came. He put up at Mrs Elley’s.

Service this evening. Barnes told me the funeral of Mrs Legge would take place on Friday at 3.30 if convenient to me.