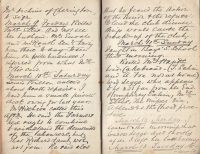 Mr Hitchcox called this afternoon. he said the Farmers here ought to combine to withstand the demands of the labourers, but that Richard Lamb would not join. He said also that he feared the action of the union and the refusal to lend the club dinner things would cause the break-up of the club.