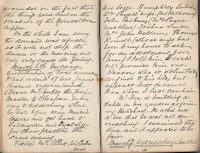 Drove Mr Wells the Choir Master to Bloxham on his way to Adderbury where he had to give some music lessons and get back to Tadmarton and Swalcliffe for choir practice the same evening.

Visited Mr Ellis, Widow Cakebread, Widow Legge. Humphrey Sabin, William Payne’s wife, (not at home) John Padbury (Mrs Payne was there) Joshua Lines, Mrs John Holloway, Thomas Rimell (whose wife had been to my house to ask for an allotment for him). I could not promise him one. Reason who is voluntarily confined to his bed, but appears less insane than when I last saw him.

Mr Fox is building a stable in his garden adjoining the School. he asked me to see that he was not encroaching. I examined the line, and it appears to be fair.