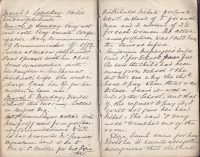 Canon Payne called with new feoffment  form for Charity Commissioners to which he had procured Mr Greaves’s signature. Sent it on to Rev. W. S. Miller for his signature.

Distributed tickets for coal. 4 cwt instead of 5 for each man and 2 instead of 2½ for each woman. The allowance for children was 1 cwt each the same as before.

Benjamin Messenger’s wife owed 1d for School fee. She said the child had been away from school and she did not see why she should have to pay when that was the case. I said it was a rule of the school, and that if she refused to pay it, I could not give her her ticket. She said “O very well” and walked out of the room.

Eliza Lamb came for hers. I told her it seemed altogether incongruous that she should retain a pew in church contrary to the expressed desire of the churchwardens and yet come to see me as a recipient of charity. She talked rather rudely and violently, saying she had always been a good churchwoman, etc. I replied that she had not given much evidence of it since I had been here, as she had attended church very seldom and her husband never. She made an excuse that she was not well enough to sit so long in church, as the service required.

Attended choir practice under Mr Wells the Choir Master from Adderbury. He came here to supper and slept at Mr Elley’s.

The Quarterly Meeting of the Sibford Benefit Club was held in the Schoolroom this evening. Those members who are also members of the Agricultural Labourers Union demanded the use of the plates, knives, etc belonging to the Sibford Club for a Union Dinner to be held on the 20th instant, when Joseph Arch  is expected to attend. There was a good deal of loud talking and in the end the demand was refused. I am told that William Kay, as trustee, refused to lend the things, and that the demand was grounded on the fact that the things were lent on the occasion of the Harvest Home Supper.

On the whole I am sorry the demand was refused, as it will not stop the dinner or the meeting, and will only cause ill-feeling.