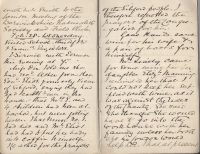 Divine Service with Sermon this evening at 7.

Miss Dix told me she had received a letter from Rev. Edward Eliot, formerly Vicar of Sibford, saying they had had scarlet fever in the house – that Mrs E. and 4 children had been attacked, but were getting better. That nurse no. 1 had died and Mr Eliot had had to put her body into coffin himself. He asked for the prayers of the Sibford people. I therefore requested the prayers of the congregation for him.

Gave Hands some wine for his wife and a pair of boots for himself.

Mrs Lively came for some wine for her daughter Elizabeth Manning. I reminded her that I could not keep her supplied with wine, as it was against the rules of the Charity. She said she thought she would have to go into the workhouse with her family unless her brothers in London would help her. That at present she and her children were almost ”familled” i.e. starved. I gave her some wine, and promised to give her money instead of coals if she had to go to the union before the next distribution.

Received letter from Ecclesiastical Commissioners to the effect that they could not give me a grant towards a new Vicarage house this year.