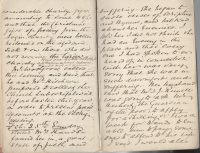 Visited Mrs Hands – found her in a great state of filth and suffering. She began to quote verses of Scripture and Hymns, and talked about her enemies. I told her I did not think she had an enemy in the place and that everyone I had spoken to or heard of in connection with her was very sorry that she was in such discomfort and suffering. Her husband said that Mrs J Rimell was going to ask Mr Herbert, the Guardian of the poor, to apply for a shilling or two a week for Hands to enable him to pay someone to attend to his wife. I said I would also consult Mr Herbert on the matter if I should see him, but that I doubted whether the application would be successful, and also whether any one could be got for so small a sum. They complained that the poor people would do nothing for them. I reminded them that poor people had generally their own affairs to attend to and if they went to work for another they expected to be paid for their labour, just as Hands himself did – that whilst they should be grateful for any help the poor gave them voluntarily, they should not complain if they did not get it. I suggested the workhouse infirmary again as the only place where Mrs Hands could get the attention she requires if her husband cannot afford to pay a nurse; but they evidently prefer liberty to enjoy their dirty condition.

Visited Widow Cakebread who is somewhat better, but I did not see her.